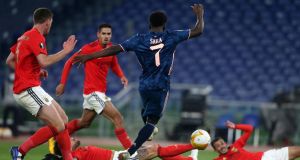 Neither Arsenal nor Benfica felt at home in Rome, but at least Mikel Arteta saw his side’s efforts count double. They deserved to leave with some kind of advantage and it was secured by a close-range away goal from Bukayo Saka, who quickly equalised after Pizzi had scored a penalty for Benfica early in the second half.

They will know it should have been greater, however, and would have been if Pierre-Emerick Aubameyang had not endured an unusually wasteful evening. Three misses included a first-half sitter that, almost any other day, could have offered a platform from which to open up a convincing margin against rugged opponents whose endeavours rarely raised the pulse. Next week’s rematch in Athens will reveal whether Arsenal are to be haunted by the ghosts of February 2020.

Arteta had urged his players to use the pain of last season’s defeat to Olympiakos, which came at the same stage and in devastating fashion, in propelling them this time around. Perhaps he had learned a lesson of his own too, because he broke with precedent in naming an unchanged side for Europa League duty. Arsenal’s dynamic performance against Leeds had suggested he is finally on to a good thing and the consequences of transforming that form to the continental stage could be far-reaching.

That failure against the Greek side was compounded by an improbable last-gasp miss from Aubameyang. It did not bode particularly well, then, when he fluffed an equally straightforward chance in the 19th minute here. Aubameyang had ignited his campaign with a hat-trick on Sunday but, picked out by a marauding Hector Bellerin, he sidefooted wide from six yards when anybody would have expected the net to bulge.

It was a rare jolt in a largely wayward first half whose meaningful initiative came from Arsenal. Benfica, currently an unthinkable fourth in their domestic league, were happy to slow the play down and niggle away where possible. There was a sense of familiarity about their lineup too, given Nicolas Otamendi and Jan Vertonghen formed two thirds of their central defence while another ex-Spurs player, Adel Taarabt, occupied a relatively deep midfield role.

Arsenal were caught offside six times in the first 35 minutes, Benfica’s defenders appearing to reckon on savvy over speed in operating with a boldly high line. The nominal hosts survived when a long pass almost found its way to Emile Smith Rowe, their keeper Helton Leite racing out to clear. Beyond that and Aubameyang’s aberration they were rarely in trouble before half-time. Bukayo Saka warmed Leite’s hands and Vertonghen recovered after slipping when clearing a Bellerin cross, with Smith Rowe lurking.

A smart feint from Taarabt gave Darwin Nunez the chance to force a fumble from Bernd Leno, while Dani Ceballos was required to track back and bail out Granit Xhaka’s error in the half’s final action. But there was little spark to proceedings, which had precisely the edge one might expect of a tussle between faded English and Portuguese giants inside an empty neutral stadium.

By the hour mark, the feeling had shifted dramatically. Saka had just dragged a presentable opening wide when Arsenal were punished in maddeningly predictable fashion. Smith Rowe had his arms outstretched when Diogo Goncalves crossed following a short corner routine and, while he was at close quarters, that tends to guarantee the concession of a spot kick today. Pizzi converted it confidently after a VAR check and Arsenal found themselves on the ropes.

They hauled themselves back within two minutes. Saka made amends for his miss by jabbing in a perfect Cedric Soares cross from the left, which had been made possible by a defence-splitting pass from Martin Ødegaard. It was the perfect response and now the match opened up, Leno making a flying save from the substitute Rafa Silva before another marvellous Ødegaard ball saw Aubameyang drill fractionally wide.

It was not Aubameyang’s night and, 15 minutes from time, he cut inside and allowed the debutant Verissimo to intervene when he would have had a clear sight of goal on his left foot. He was immediately replaced by Nicolas Pépé and the tempo largely wound down from there, both sides seemingly content to adjourn until the decider in Greece. - Guardian