Ken Early: Liverpool not just out of luck - they need a rebuild 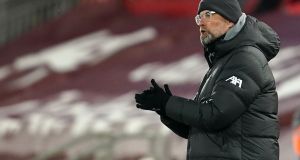 “Big parts of the game, brilliant” insisted Jurgen Klopp, with the air of the nuclear plant manager testifying at the inquiry that the reactor had functioned superbly well 99 per cent of the time.

He knew that this game would only ever be remembered for an astonishing meltdown by his goalkeeper Alisson, whose first of many amazing mistakes became a meme in real time thanks to the reaction of Jamie Carragher. The Sky co-commentator reacted with what was described by his colleagues as a ‘yelp’ but was actually more of an anguished mooing sound, as from a bullock being dragged towards the chopping block.

Klopp’s suggestion that Alisson’s bizarre series of kicking errors might have been caused by “cold feet” ensured the manager himself would be getting memed along with his goalkeeper. The excuse was greeted with malicious glee by Roy Keane, who was spanked on air by Klopp after the Liverpool-Arsenal game back in September, and who now intended to enjoy every minute of his revenge.

Less than two months ago Klopp was accepting the Fifa Best Men’s Coach of the Year award for the second year in a row. Now he’s presiding over Liverpool’s worst run of home defeats since Merseybeat, and has somehow allowed himself to get bogged down in unwinnable asymmetric warfare against Geoff Shreeves.

Of course Klopp’s exchanges with a TV reporter are not a significant part of the story, and yet his flashes of peevish sarcasm are revealing of the strain he has come under as he watches his once-great team dissolve.

For three seasons now he and Liverpool have had nothing but praise, acclaim, applause, awards, more praise. Now that they have forgotten how to win they are being reminded that defeat means not just disappointment but indignity, ridicule, mortification. It’s hardly six months since Liverpool lifted the Premier League trophy and they are already a laughing stock. Their initial run of success under Klopp seems at an end. The question now becomes: was that it?

Liverpool, by contrast, look overdue a rebuild, after signing nobody in the summer of 2019 and then having to scale back transfer plans when the pandemic hit

The best example of a team that recently walked through a storm and came out with their head held high is Manchester City, whose poor 2019-20 season sent them to some places even darker than the one currently inhabited by Liverpool. Go back to this week last year and the outlook for City was truly bleak: out of contention for the league and newly banned from European competition for two years over FFP breaches, a punishment which clearly had the potential to cost them the services of Guardiola and some of their top players.

By the end of the summer the European ban had been lifted, Guardiola had signed a new contract, and now the regrouped, revamped, refreshed City are cruising to a likely third league title in four seasons, after a run of 14 successive wins that approaches their best-ever sequences. David Silva is gone and Sergio Aguero hardly plays any more, but players like Ilkay Gundogan and Phil Foden have blossomed in their place and look capable of bringing a new cycle of City success.

There’s one important way in which City are different from Liverpool: Sheikh Mansour continues to be the wind beneath their wings, at a time when the pandemic has forced most clubs into the red. Much of City’s improvement this season has been credited to the form of Ruben Dias, a £60 million arrival in the summer, and the revival of another £60 million signing in Joao Cancelo. City’s £154 million summer spend also brought in Nathan Ake - remember him? - and the gifted Ferran Torres.

Liverpool, by contrast, look overdue a rebuild, after signing nobody in the summer of 2019 and then having to scale back transfer plans when the pandemic hit. Great teams seldom last longer than three years, and if you take the signing of Virgil van Dijk in January 2018 as the moment when this Liverpool side made the leap from good to potentially great, they passed the three-year mark last month. Is this team just a couple of tweaks away from being competitive again, or does it need to be fundamentally rebuilt?

Klopp’s final season at Dortmund posed some questions like this, as his previously-successful team suddenly flatlined and plunged into freefall, prompting media speculation that he had flogged the players beyond their limits with his too-demanding style of play. In the end Klopp felt that the hierarchy at Dortmund had come to share these doubts, and decided to leave at the end of the season.

Whatever they decide to do, they won’t be looking to change coach, because they know Klopp remains the best they can currently hope to have

It has passed into the foundation myth of Klopp’s time at Anfield that Liverpool’s director of research, Ian Graham, took a close look at that last campaign in Germany and concluded that, far from being fundamentally broken or “rumbled” in some way, Dortmund had actually just been really really really unlucky.

Could you look at Liverpool’s recent death spiral and draw similar conclusions? Nine matches since Christmas have produced four defeats and only two wins. However, if you look only at the expected goals, they’ve ‘won’ seven out of the nine, suggesting that even these poor performances should have produced better results. “Big parts of the game, brilliant,” as Klopp might say. And yet this seems unlikely to reassure anyone who has watched this recent run.

Liverpool don’t look like a frustrated team that’s having an unprecedented run of bad luck. They look all out of ideas. Does the Liverpool hierarchy think this is just bad luck, or do they see it as a problem that required action rather than just patience?

Whatever they decide to do, they won’t be looking to change coach, because they know Klopp remains the best they can currently hope to have. But it’s not necessarily up to them: at Dortmund, it was Klopp who decided to leave. Does he feel like he can do it all over again? Rebuilding a team is harder than building one, because you have to cut players who have served you well. Klopp didn’t have to kill his darlings at Mainz or Dortmund, where the good players were sold before they got old.

His annoyance with Liverpool’s slowness to sign some new defenders was plain in recent weeks. Does Klopp have the energy to meet the renewed challenge of City, of Manchester United, and of Chelsea, who have finally hired a competent coach? Does he believe that Liverpool will give him the backing he will need to do it? And does he accept that he will have to do all this while fending off a steady stream of questions from Geoff Shreeves? Until these questions are answered, Liverpool are in limbo.