Can the verve of Sancho and Haaland derail Bavarian giants’ bid for eighth-straight title? 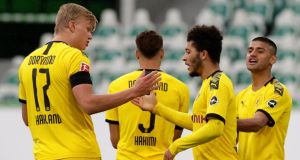 Ever since the Bundesliga’s fixture list was released way back in July last year, the timing has looked delicious. For neutrals, the two fixtures that tend to leap out are the confrontations between Bayern Munich and Borussia Dortmund. Fans have practically been able to set their watch on the arrival of the return fixture, placed within the span of a week in early April for five of the last seven seasons.

In 2019-20, the return had a twist. For the first time since 2016, the second match would be played in Dortmund, more significant than it sounds given BVB’s woeful record in Munich in recent years – six successive Bundesliga losses, with three goals scored and 24 conceded. For Dortmund, another trip to their Allianz Arena field of screams in a potential title run-in would have been a major psychological obstacle.

Even if circumstance dictates that the white-hot atmosphere of Westfalen – which in 2013 prompted the recently departed Mario Götze to warm up in the tunnel on return – Lucien Favre’s side will be grateful for even adjusted home comforts. The scheduling always offered hope for competitive balance, as well as for Dortmund. For everyone else, there is hope of a contest.

Now, with the Bundesliga the only elite European league back from hiatus, there will be more watching neutrals – or perhaps not-so-neutrals – watching on than ever before. Though a crowd-free German domestic game is not the platform its proponents would have dreamed of, the on-pitch balance is almost as enticing as any could have wished for. Four points separate Bayern, chasing an eighth successive title, fromg Dortmund. A home win would beckon the world further into the closing stages of the Bundesliga season, via a medium familiar to millions of world football fans.

It was already neatly packaged – and had been for some time – as Der Klassiker, the German equivalent to Barcelona taking on Real Madrid. There is not quite the same historical resonance here: Bayern’s decades-long dominance of the league has meant the epithet “Klassiker” has habitually been applied to a face-off between the Rekordmeister and their biggest threat, none of whom has been exactly eternal.

That the moniker has stuck to Bayern v Dortmund is not just an expression of how successfully the Bundesliga markets itself on the international stage these days, but of how enduring this rivalry has been over the last decade. BVB’s successive titles in 2011 and 2012, prefacing the 2013 Champions League final between the two teams, are responsible not only for the genesis of this rivalry, but for Bayern’s apparent impregnability of the moment.

The gall of Jürgen Klopp’s team in denying Bayern two years in a row, then humiliating them in the 2012 German Cup final in Berlin (which Dortmund won 5-2 with a Robert Lewandowski hat-trick) cajoled and provoked the Bavarians into becoming the most ruthless versions of themselves. The tension has continued to crackle in the meetings since, from the robust meeting between the pair at Signal Iduna Park in May 2013, 20 days before the Champions League final, through the defections of Götze, Lewandowski and Mats Hummels.

Dortmund would like to believe they are now past the stage where they can be picked off by the Bayern behemoth – and whatever the optics were to the international stage, they had control over Hummels’ exit to a far greater extent than they did those of Götze and Lewandowski. Though their budget is just over half than that of the champions, a second straight season as a genuine title contender shows that much has changed since 2013, in expectation as much as image.

So while Erling Haaland and Jadon Sancho are forging their reputation as world superstars in Dortmund, attracting established stars is also possible. Emre Can has arrived for big money from Juventus and Hummels made the return journey from Bayern in 2018 (the former replaced the latter, who has a sore Achilles, in Saturday’s 2-0 win at Wolfsburg).

Bayern have evolved too since the rivalry took hold, albeit in a more subtle way. The appointment of Pep Guardiola in 2013 underlined their ambitions to become synonymous with a seductive brand of football rather than simply success. Reassuring constants remain – not least the outstanding form of Thomas Müller, again superb in Saturday’s 5-2 defeat of Eintracht Frankfurt – but a desire to add a cosmopolitan streak to old cliches of German grit is clear. The €80m (£71.6m) signing of French defender Lucas Hernández from Atlético Madrid in 2019 nearly doubled their previous record transfer fee paid – although the World Cup winner is only on the bench at present.

With the world watching, this is Bayern’s chance to shatter the myth outside Germany that their relentless winning football is not entertaining – and, refocused under Hansi Flick, they are as irresistible as they have been at any point since the end of Guardiola’s reign. At 31, Lewandowski is looking better than ever, and has scored 16 times against his former club since leaving in 2014. At the other end Alphonso Davies, the teenage Canadian winger now established as a rampaging attacking left-back with Flick, adds another dimension.

“We will have to endure phases in which Bayern will dominate,” said Dortmund’s sporting director, Michael Zorc, on the eve of the game with some understatement. He is well aware that doesn’t preclude his side – so able on the counter-attack, as they have shown since returning to action – from winning. While the scale of the occasion may be reduced, the mere suggestion of jeopardy should be enough to beguile. - Guardian

1 Exiled Seán O’Brien not ruling out a third Lions tour
2 PSG break quarter-final curse with stunning injury-time victory
3 Seán Moran: It won’t take much before cancelling All-Ireland looks like a solution
4 ‘Embarrassment, anger, sadness’: the decline of the great Stephen Hendry
5 Heroic insanity: When Michael Dunlop raced home in memory of his father
Real news has value SUBSCRIBE
Crossword Get access to over 6,000 interactive crosswords