If broadened onto a larger scale, even six tests among clubs is quite a high percentage 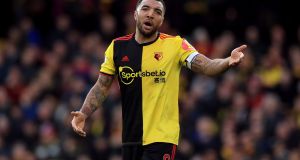 Watford’s Troy Deeney opted not to return to training this week because of the risk of coronavirus. Photo: Mike Egerton/PA Wire

This week Troy Deeney explained why he would not be returning to small-group training. He was concerned, he said, that black people are four times more likely to die from Covid-19 in the UK than the national average, and he needed to protect his five-month-old son, who has had breathing difficulties. “It only takes one person to get infected within the group, and I don’t want to be bringing that home,” he said.

His concerns were understandable, but at the time he seemed to be being perhaps a little overcautious. The number of excess deaths among BAME communities has not been fully explained, but people from ethnic minorities are overrepresented in many high-risk groups, such as those employed in critical industries including health, transport and essential retail businesses, those living in areas of high depravation and in overcrowded homes, and those with certain relevant underlying health conditions. People from BAME backgrounds are more likely than average to be in poorly paid jobs, to be unable to work from home, and so to be forced for financial reasons to put themselves at risk of infection, or to be living with someone who is.

Deeney, however, is not. These numbers should not apply to him, or anyone with the space, the means and the inclination to cocoon themselves and their families. Most Premier League players should be as safe from infection as it is possible to be.

Then the Premier League tested 748 people, players and support staff at 19 top-flight clubs, and found that six had Covid-19. Three of those work at Watford, including the centre-back Aidy Mariappa. Six is a small enough number for the initial reaction to have been relief – our back-page headline declared that “just six test positive” – but in many ways this was a surprisingly hefty return.

It is just a snapshot, with a relatively small sample size, and thus a number of caveats must apply, but the fact that at least 0.8 per cent of key playing and support staff at Premier League clubs had Covid-19 – eight weeks after the UK lockdown was imposed – is unexpected (and given the accuracy of swab testing the true figure could be higher). At Watford about 7.5 per cent of those tested were positive, enough to make Deeney’s concerns look completely reasonable, perhaps even understated.

Last week the Office for National Statistics released provisional results of its infection survey, undertaken in partnership with the universities of Oxford and Manchester, Public Health England and the Wellcome Trust. Its conclusion was that outside of hospitals and care homes, between April 27th and May 10th around 148,000 people in England had Covid-19 at any one time, roughly 0.26 per cent of the population. Its upper estimate was 222,000 people, or 0.41 per cent. As the impact of the lockdown continues to be felt, and the impact of people being encouraged to return to work is yet to significantly hit, that figure should have decreased since.

Yet at Premier League clubs the figure from tests on Sunday and Monday was at the very least twice as big – equivalent, if mirrored across the country, to there being 451,500 people in England with Covid-19 – and closer to the 1.33 per cent found by the ONS among those working in patient-facing healthcare or resident-facing social care roles, people whose jobs put them at the highest level of risk.

We already knew that three members of Brighton’s squad had tested positive for Covid-19. If they were among the 28 players who have been in three or more matchday squads this season, that would amount to 10.7 per cent of the total. Even if no other players have had the virus without being tested or without testing positive, this would mean the Seagulls’ first team have endured an outbreak on a similar scale to that in Madrid or the estimated 10 per cent of people in Lombardy, the focus of Italy’s coronavirus calamity, believed to have contracted the virus.

It is important not to get overexcited by small samples, to note that 16 of the 19 clubs tested on Monday produced no positive tests, and to acknowledge that testing positive does not necessarily mean that you have been hosting bunga bunga parties. “I’ve been scratching my head to try to work out how I might have got coronavirus,” Mariappa told the Telegraph. “It was a big surprise because I haven’t really left the house, apart from some exercise and the odd walk with the kids.”

This is a cruelly efficient virus, particularly skilled at insinuating itself into the bodies of even the most wary, and some or even all of the Premier League six may just have got unlucky. But it is certainly tempting to deduce from these numbers that either the virus remains more prevalent than we have been led to believe or that some players and coaches aren’t staying quite as alert as the government would like. – Guardian