All in the Game: Neville finding ways to burn his energy

Haaland strikes a pose, Herrlich is caught out, quotes of the week and by the numbers 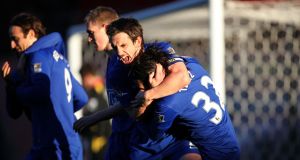 Gary Neville hit out at Carlos Tevez for his apparent lack of effort during his final days at Manchester United. Photo: AMA/Corbis via Getty Images

Spare a thought for Gary Neville during the lockdown. This is a man who once did shuttle runs in the aisle of the plane on the way back from a European away trip. You can only imagine he has energy to burn – but how to burn it?

Neville has been on the frontline of Sky Sports’ efforts to keep the ball rolling in the absence of any real football, and can often be seen with a pair of earphones in, putting the world to rights alongside to Messrs Carragher, Swanson, Redknapp et al.

Last week the eight-time Premier League winner accused Carlos Tevez of downing tools towards the end of his final season at Old Trafford, ahead of his acrimonious move across town to Manchester City.

This ruffled the feathers of Tevez’s super-agent Kia Joorabchian and so – because nobody’s got anything better to do – Sky brought the two of them together via a video call.

The “debate” lasted nearly half an hour, during which Jamie Carragher pops up on screen eating a bag of popcorn, as a minor story was manufactured to become the main event. Move aside Monday Night Football.

The sooner the real action returns the better – for Neville’s sake as well as ours.

Herrlich lets the toothpaste out of the tube

Herrlich – which translates into English as fantastic or wonderful – only took over at Augsburg in March and is still waiting to oversee his first game in charge, after he left the team hotel to buy toothpaste and skin cream.

This violation of lockdown rules meant he was unable to take training on Friday, and also had to miss his side’s home clash with Wolfsburg.

An apologetic Herrlich said: “I made a mistake by leaving the hotel. In this situation, I didn’t live up to my position as a role model for my team and the public.”

In Herrlich’s absence Augsburg battled back from a goal down, only to lose at the death as Daniel Ginczek gave Wolfsburg a 2-1 victory with a 91st-minute winner. Ouch.

It didn’t take long for the ice-cool Erling Haaland to steal the show when the German top flight resumed at the weekend.

The 19-year-old striker needed just 29 minutes to end a 12-week goal drought on Saturday, finishing mercilessly from inside the box to give Borussia Dortmund a 1-0 lead against Schalke 04.

His celebration soon went viral, as he ran towards the corner flag, pointed up to the cavernous empty stands and then struck a pose – all while staying socially distant from his Dortmund team-mates.

Haaland then managed 11 words during a weird post-match interview, which was fit for a thoroughly weird occasion.

12: The number of goals Erling Haaland has scored in 11 Borussia Dortmund appearances since his arrival in January. The real deal.

“A Revierderby without fans makes your heart bleed.” - Borussia Dortmund sporting director Michael Zorc ahead of Saturday’s clash with Schalke. A 4-0 drubbing of their bitter rivals might have cheered him up slightly.

“I didn’t learn a lot during lockdown except Gary Neville has an opinion on absolutely everything! It’s incredible!” – Jürgen Klopp has also noticed the fullback-turned-pundit’s attempts to keep busy.

“He was just before my time so I didn’t get to watch much of him. So watching this just motivates me.” – Chelsea forward Tammy Abraham has been inspired by Michael Jordan and the brilliant documentary, The Last Dance. Who hasn’t?

“I scored a hat-trick against Norwich once but I did not move. I was embarrassed, I was actually embarrassed. I was really bad but I scored three goals.” – Thierry Henry. There’s no pleasing some people.

“He makes interventions beyond any logic, even with injuries that he causes with almost diabolical cunning.” – Giorgio Chiellini admires the defensive dark arts of Sergio Ramos in his new book.