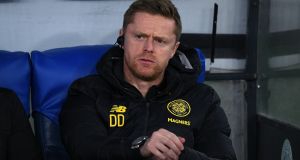 Damien Duff will leave his role with Celtic to concentrate on Ireland. Photo: Giuseppe Maffia/NurPhoto via Getty Images

Damien Duff has left his coaching role at Celtic to concentrate on his assistant manager’s job to Stephen Kenny with Ireland.

Duff has been a first team coach under Neil Lennon for a little over a year at the reigning Scottish champions but will leave the club when his contract expires in June.

“I spoke to Damien on Monday and he was in good spirits, but he’ll join the FAI,” said Lennon.

“It’s a blow because he contributed immensely and personally I got on great with him.

“He’s in his formative years as a coach but he made a huge contribution and there was a good chemistry there. So he’ll be difficult to replace, that’s for sure.

“We were waiting on everything getting called first then we’ll look to replace him but it’s not at the forefront of our minds.”

Duff will work alongside Keith Andrews and Alan Kelly in the coaching setup behind new Ireland manager Stephen Kenny.