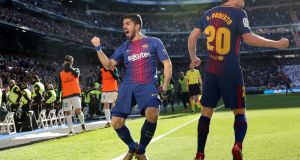 Barcelona moved 14 points clear of Real Madrid in LaLiga as three second-half goals wrapped up a convincing 3-0 victory at the Estadio Bernabeu.

Zinedine Zidane’s men had the better of a tight first period but the Catalans took control in the second and Luis Suarez swept home the opener before a Lionel Messi penalty took the game beyond Real.

It was a strange spot-kick award by referee Jose Maria Sanchez Martinez, who could simply have awarded a goal rather than a penalty after Dani Carvajal handled on the line but then knocked the ball in as he lost his footing. The decision also saw Carvajal sent off.

Substitute Aleix Vidal added a third in stoppage time, and the title now looks almost certain to return to the Nou Camp as La Liga prepares to enter its winter break.

Cristiano Ronaldo headed in off the underside of the bar for Real in the second minute but it was rightly disallowed for offside, as the hosts made a bright start.

The Portugal star then swung and missed at a low centre from Toni Kroos, with Andres Iniesta just getting to the loose ball ahead of the onrushing Carvajal to concede a corner.

Real were dominating possession and Messi dropped deeper and deeper in a bid to influence the game as the inclusion of Mateo Kovacic in Real’s midfield looked a masterstroke.

Messi almost created the opener on the half-hour mark as his angled pass picked out Paulinho’s run from deep but the Brazilian midfielder hooked his shot over.

Seconds later Barca goalkeeper Marc-Andre Ter Stegen stuck out a foot to divert a Ronaldo shot wide after the Portuguese cut in from the left.

Real goalkeeper Keylor Navas got down well to keep out a glancing Paulinho header five minutes before the break, and then Karim Benzema’s headed effort clipped the post after he got to Marcelo’s centre before defender Thomas Vermaelen.

Barcelona saw more of the ball in the early stages of the second half and took the lead in the 54th minute when Ivan Rakitic broke forward, spread the play right to Sergi Roberto and his low cross was side-footed home by Suarez.

Real’s frustration began to grow as Sergio Ramos was booked for a foul on Suarez, and Barca added a second in bizarre circumstances in the 64th minute.

Suarez had a shot blocked by Navas and then hit the post before Carvajal was sent off for a deliberate handball.

It was a controversial call to award the penalty and send the full-back off as the ball ended up in the net mere seconds later, but Messi’s confident penalty made sure there were no further recriminations.

Gareth Bale and Marco Asensio were brought on in a bid to give Real more cutting edge, and Ter Stegen reacted well to keep out a shot from the Welshman.

The Germany goalkeeper also made an impressive near-post block on a Ramos effort as Barca held firm at the back, and there was still time for a third after Vidal’s shot squirmed under Navas after good work from Messi on the right flank.