Some said England had ‘found out’ the Manchester City manager. The opposite is true 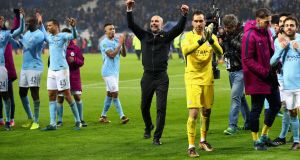 “I sat on the touchline and watched the game, but after about 25 minutes I was at a loss. I’d never seen such thunderous tackling, all studs up with arms flailing – how was a I going to make my mark in this type of football?”

Robert Pires is recalling his first appearance as an Arsenal player, at Sunderland in August 2000. Pires was experienced, 26, a French international with more than 50 caps. He had been France’s Footballer of the Year five years earlier, he had played in the World Cup in 1998 and in the final of Euro 2000. He was quite a signing for Arsenal.

Yet that first game for Pires’s new club ended in defeat at Sunderland, Patrick Vieira was sent off and Arsene Wenger was involved in a ruckus in the tunnel. By the end of the season Pires was admitting “matches would pass me by” and “I wasn’t living up to my billing”.

When he looked back, he said: “At times it did cross my mind whether I’d made the right decision in coming to England.”

All the while, though, something was happening: Pires was receiving an education and he was smart enough to apply it. Fast-forward a season and, with him acclimatised, Arsenal won the Premier League and the FA Cup. Pires was voted England’s Footballer of the Year. Any doubts that had gathered around the French man melted away.

This brings us to Pep Guardiola and what might be termed the Robert Pires second-season syndrome.

We have just passed the anniversary of Manchester City’s 4-2 defeat at Leicester City after which Guardiola was again asked if he had underappreciated the physicality and intensity of English football. Guardiola said then: “I’m not a coach for the tackles.”

He was being honest but it also sounded flippant and was seized upon by those keen to argue that Guardiola’s achievements had come at Barcelona and Bayern Munich, clubs accustomed to domestic domination. England, the argument went, has more competitive depth. Some even said Guardiola was being “found out”.

Actually, what was happening was the passing of time and experiences. Guardiola was learning, just as Pires did, and within that there will have been doubts and questions. But Guardiola’s core belief, that possession football eradicates the need for relentless tackling, was unmoved. What he has done in the 12 months since is adapt. It is an under-rated quality.

Bacary Sagna, Aleksandar Kolarov and Pablo Zabaleta played at Leicester last December; by season’s end they were gone. Goalkeeper Claudio Bravo played then; he was replaced by Ederson – the most expensive goalkeeper of all time.

There have been other changes in personnel and positioning and certain players have been coached into Guardiola’s style. He has tinkered and refined, and the end product has been some exceptional football. It feels taut, highly organised and yet in passages there is freedom: it is a sort of choreographed spontaneity. Even if it were not victorious, it would be enjoyable to watch.

Guardiola has done the most impressive thing: he looked, learned and improved. Not everyone hits the ground running as, say, Jose Mourinho did at Chelsea in 2004.

“After all the self-doubt of my first year at the club, I had hoisted my game to another level,” Pires said.

For thinking about the game differently and for making us think about the game differently, Guardiola deserves all the praise he is receiving. Those raking, accurate passes from Ederson last Saturday against Tottenham showed why Guardiola wants a footballer in goal. His goalkeeper is not simply going through the motions of booting the ball clear, he is attacking from the back. Why, 25 years after the change in the back-pass law, had others not thought of that or attempted it?

Guardiola has stretched the pitch, made the game expansive. In a condensed space, after all, there are more tackles.

The man himself, too, appears happier. That was some celebration with City fans when he returned to Leicester on Tuesday night. “We’ve got Guardiola,” they sang to the tune of Glad All Over.

It is an appropriate tune for Manchester City, whose current invincibility means that one of the sides they are being compared to are the Arsenal of Pires’s fourth season, the Invincibles.

City have a way to go to equal that team but the manner in which they are playing, and the degree of superiority over opponents, means that no-one will be surprised should it happen. They have not lost domestically since April.

Kevin de Bruyne, who looked uncomfortable at times last season, has been fully assimilated into Guardiola’s City. De Bruyne is playing exquisite football. He already has as many league goals as last season.

Pires, Guardiola, De Bruyne – their arcs are reasons we love the game. It comes from the people on the pitch.

There is another football of course. It comes from the boardroom and offshore bank accounts, and where Manchester City are concerned, it is possible to be less than comfortable.

This goes beyond the “you-bought-the-title” exchanges between supporters – this is not tit-for-tat fan rivalry. It also goes beyond the club’s ability and willingness to outspend everyone else in the market – if Virgil van Dijk and/or Alexis Sanchez join in January then City will have pushed on again at the expense of direct rivals Liverpool and Arsenal.

No this is macro-economics and politics and the use of football as a cultural tool of influence.

Fresh reports on Abu Dhabi ideology and practice and the City ownership restates the benefits places such as Abu Dhabi and Qatar receive from their association with English and European football.

It is a critique of “soft power”, a term where the first word carries more weight verbally than the second. The reality might be the opposite.

Soft power works. For all the criticism Qatar has received for its staging of the 2022 World Cup and its bloody treatment of workers in the construction of stadiums whose use post-tournament fate will be of interest, this oil-rich city state has still been able to acquire Paris St Germain, sponsorship of Bayern Munich and a piece of Real Madrid.

It is not stopping; football – like art – is a gateway. Money talks, and at Manchester City it spoke of patience in the lengthy pursuit of Guardiola and then again in his trophyless first season. The money may not shape Guardiola’s football ideals, but it facilitates them.