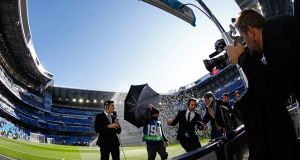 Journalists get wet pitchside ahead of Real Madrid CF vs FC Barcelona at the Santiago Bernabeu stadium. Photograph: Getty Images

Ernesto Valverde’s men have an 11-point gap over the reigning champions ahead of the two clubs’ final fixture in 2017.

Here’s a look at five talking points ahead of the contest.

Zinedine Zidane may have dismissed the notion on Friday but Real will surely be out of the running if Barcelona win in the Spanish capital and open up a 14-point gap over their great rivals. Ernesto Valverde’s unbeaten side have dropped just six points all season and Real would surely concede defeat in their quest to regain the title if the deficit to Barca is widened further still.

No guard of honour for Real

Cristiano Ronaldo opened up a debate when saying it “would be nice” if Real’s Club World Cup triumph last weekend was marked with a guard of honour from Barcelona’s players. The visitors have no intention of welcoming Real’s players onto the pitch in such fashion, as they did in 2008 three days after Real won the LaLiga title. Frank Rijkaard’s side were then thrashed 4-1.

It has been three months since forward Gareth Bale last started a league fixture yet Zidane revealed he is “100 per cent (ready) to play” after a pair of impressive cameo appearances at the Club World Cup. Given the magnitude of the fixture, and Real’s need for a victory, Zidane must be considering choosing the Welshman in his XI following his return from a calf problem.

As ever when these two heavyweight clubs meet, all eyes will be on which superstar has the better day. The year 2017 has belonged to Ronaldo, who recently won his fifth Ballon d’Or award, tying him level with Messi, having scored a brace in the Champions League final and helped Real to the LaLiga title. Yet in the last league meeting between the two in April it was Messi who scored the winner, his 500th goal for Barca, and celebrated by holding the name on his shirt up in front of the Barca fans.

Real’s chances of defeating Valverde’s team will be greater if they can keep 11 men on the pitch, something that has proved beyond them in many recent Clasicos. In four of the past six games against Barca Los Blancos have had a man dismissed, while defender Sergio Ramos has been sent off five times in these fixtures, with three of those reds being brandished in the past three years.

1 Gordon D’Arcy: If South Africa moves up north, it could all go south
2 Charlesland Golf Club set to close permanently in December
3 South African franchises could join Pro16 by next March
4 When Down’s 1960 All-Ireland victory brought down barriers
5 Stephen Kenny feeling hopeful ahead of Euro 2020 playoff
Real news has value SUBSCRIBE
Crossword Get access to over 6,000 interactive crosswords