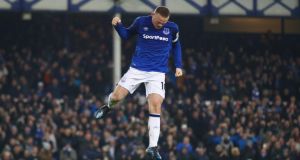 Wayne Rooney of Everton celebrates as he scores their third goal from the penalty spot during the Premier League win over Swansea City. Photo: Clive Brunskill/Getty Images

Defeat came with an added sting for Swansea City as their hopes of climbing off the foot of the Premier League floundered at Everton.

Gylfi Sigurdsson, the man prised from south Wales in the summer for £45m, struck a sublime goal to extend Sam Allardyce’s unbeaten run as Everton manager while the Icelander’s former club also counted the cost of two avoidable penalties. Everton scored from both spot-kicks – Dominic Calvert-Lewin with the first after Wayne Rooney’s initial effort was saved, Rooney making amends with the second – to give their victory a flattering margin.

Swansea were the brighter side until the interval but paid the price for carelessness in and around their own penalty area and for Sigurdsson’s moment of class.

Swansea arrived on foggy Merseyside having scored nine league goals all season, the lowest return in England’s top four divisions and as many as Rooney alone had plundered for their opponents. Their prospects of reaching double figures appeared even more remote when Wilfried Bony hobbled off after only five minutes and one touch of the ball.

The lone striker lost out to the former Swansea captain Ashley Williams in an innocuous challenge near the touchline before pulling up when he returned to the pitch. Bony’s absence with a hamstring injury was keenly felt by Swansea earlier in the campaign and they can ill-afford a repeat, yet their response at Goodison will have greatly encouraged Clement.

With Luciano Narsingh causing Cuco Martina frequent problems, breaking clear of Everton’s makeshift left-back three times in the opening 23 minutes, Tammy Abraham replacing Bony and Nathan Dyer prominent, the visitors had the pace and energy to punish a languid Everton display. Allardyce’s pre-match warning about complacency proved prescient and the home side were extremely fortunate to go in level at half-time.

One of the main reasons for Swansea’s shortage of goals was the departure of Sigurdsson, the creative force behind last season’s escape from relegation, to Everton. The Iceland international has shown signs of improvement with each passing game under Allardyce and it took a while for him to find his rhythm and passing range against his old club. He was not alone. Aaron Lennon was one of the few in royal blue to display any urgency in the first half but his final ball was lacking and Swansea were comfortable in defence until the final act.

The visitors deservedly took their Premier League goals tally into double figures when Leroy Fer converted Tom Carroll’s corner beyond an exposed Jordan Pickford. Carroll’s delivery from the right eluded a mass of red and blue shirts at the near post. Fer, arriving unmarked behind the bunch, scored with ease from close range.

Carroll had also tested Pickford with a free-kick awarded by Jon Moss after Mason Holgate had foiled a Swansea counterattack with a fine challenge on Dyer. While the home crowd berated the referee for that decision they had no complaints over his award of a penalty on the stroke of half-time for a clumsy challenge by Roque Mesa on Lennon. Seizing on Rooney’s flick into the area, the winger went tumbling after slight contact with the midfielder’s thigh and Everton had their sixth penalty of the season, the most in the Premier League.

Unlike at Anfield, however, Rooney was unable to find the net. His spot-kick was superbly tipped on to a post by Fabianski but the rebound fell perfectly for Calvert-Lewin who swept the ball past the unfortunate Swansea goalkeeper.

Fabianski’s luck improved early in the second half when his delayed clearance struck Calvert-Lewin but rebounded to the sanctuary of a Swansea defender. The game, unfortunately, remained at a pedestrian pace until Sigurdsson illuminated the night with a goal completely out of context with the quality around it.

Allardyce had seen enough of Everton’s slow passing tempo and introduced Tom Davies for Morgan Schneiderlin on the hour. Within minutes the young midfielder played a first-time pass into Rooney in the centre. He switched the play out to Sigurdsson on the left and the former Swansea favourite cut inside Kyle Naughton before bending an unstoppable shot around Fabianski and inside the far post. Sigurdsson’s celebrations were restrained while his team-mates revelled in his fourth goal of the season.

Everton were awarded their second penalty of the game, and seventh of the season, when Martin Olsson was adjudged to have clipped Jonjoe Kenny’s heel after he exchanged passes with Lennon. There was certainly contact between the two full-backs but the offence appeared to happen outside the area. There was no disputing Rooney’s finish. He went the opposite way to the first spot-kick, so did Fabianski, but the keeper was powerless to prevent the former England captain embellishing the victory. – Guardian service