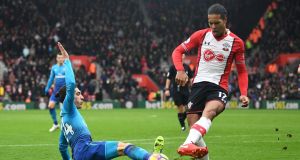 Pep Guardiola has informed Manchester City’s hierarchy that he would like to sign Arsenal’s Alexis Sanchez and Southampton defender Virgil van Dijk, with both understood to have been identified as primary targets for the Premier League leaders.

City, who will entertain Bournemouth on Saturday as they go in search of a 17th successive victory, are keen to strengthen in the January transfer window despite their record-breaking start to the season that has seen Guardiola’s side establish a 11-point lead over Manchester United.

Having failed to agree a deal for Sanchez in the summer after Arsenal decided against cashing in on the Chile forward despite him entering the final year of his contract, a renewed approach next month appears likely despite Arsene Wenger reiterating his stance that the 29-year-old will not be allowed to leave the Emirates.

Guardiola has also set his sights on Dutch international Van Dijk as he attempts to provide back-up for his defence, with concerns over captain Vincent Kompany’s long-term fitness. It is believed that there has already been contact between City and Southampton regarding the 26-year-old’s availability, with City keen to avoid a repeat of the summer saga which saw Liverpool reported to the Premier League for an alleged illegal approach.

Van Dijk has been restored to the Southampton first team under Maurico Pellegrino after having a transfer request rejected but could be allowed to leave should they receive a suitable offer, thought to be in the region of £60 million (€67.5 million). However, City are unlikely to pursue him in the January window and view the former Celtic defender as a long-term replacement for Kompany.

Guardiola has also stipulated that he would like to add another central midfielder to his squad as cover for Fernandinho, with Yaya Toure set to depart the club at the end of the season when his contract expires. Borussia Dortmund’s Julian Weigl is understood to be one of the names under consideration, although the 22-year-old Germany international has also been linked with Manchester United in recent weeks, with Barcelona also credited with an interest.

Kevin De Bruyne is set to sign a new contract in the new year having starred for City this season, with a six-year contract worth around £210,000 (€236,000) per week believed to have been agreed with his agent Patrick De Koster last week.

Guardiola is also keen to retain the services of Sergio Agüero despite the potential arrival of Sanchez. The Argentina forward was left out of the side which beat United in the Manchester derby earlier this month and showed his frustration when he was substituted in the 4-1 victory over Tottenham on Saturday. But with City still in contention to win an unprecedented quadruple of Premier League, FA Cup, League Cup and Champions League, Agüero remains part of his manager’s plans.

“That’s normal – I understand,” Guardiola said after the Spurs match. “He wants to play but at that moment I needed a little more energy with Gabriel [Jesus] in that position.

“I don’t want to hurt the players. I understand, I was a football player and I know they want to play. It always breaks my heart when the players cannot play because they deserve it. But it is what it is.” – Guardian service