Atletico’s unbeaten run comes to an end at Espanyol

Barcelona’s Catalan rivals do them a favour in La Liga title race, ahead of the ‘Clasico’ 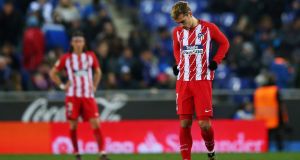 Atletico Madrid’s Antoine Griezmann has his head down after Espanyol score the only goal of Friday night’s game. Photograph: Albert Gea/Reuters

Atletico Madrid suffered a surprise 1-0 defeat to Espanyol on Friday, their first loss in La Liga this season, wasting the chance to put pressure on leaders Barcelona a day before the ‘Clasico’.

Veteran Spanish striker Sergio Garcia struck the only goal of a tight game in the 88th minute, stroking the ball into the bottom corner after a sweeping counter-attack as Atletico were caught out desperately trying to win the game.

Diego Simeone’s side went into the match on a four-game winning streak but were starved of chances against the Catalans, who are coached by former Atletico manager Quique Sanchez Flores.

Atletico had not lost in their previous 20 away visits and narrowly missed out on matching the Liga record for 23 away games without defeat, set by Pep Guardiola’s Barcelona between 2010 and 2011.

“They closed us down very well, it was a very tactical game, and whoever takes their chances wins the game and this time it was them as we didn’t take ours,” Atletico midfielder Koke told reporters.

“This is a step backwards for us as we didn’t drop points, especially given tomorrow’s game, but the story goes on, we have to move on and learn from our mistakes.”

Atletico striker Antoine Griezmann had a penalty appeal turned down in the second half while Diego Godin had a goal correctly ruled out for a foul on an opposing defender.

Substitute Kevin Gameiro passed up Atletico’s best opportunity, firing straight at the home side’s goalkeeper Pau Lopez when clean through in the area.

Atletico now go into the winter break now and can look forward to the arrival of Spain forwards Diego Costa and Vitolo when their ban on registering new players ends on January 1st.

Atletico are second in the Liga standings, six points behind Barca, who are the only remaining unbeaten side in the league and can go nine clear of Simeone’s side if they beat champions Real in Saturday’s Clasico. Valencia could leapfrog Atleti into second if they beat Villarreal later on Saturday.