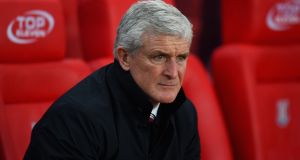 Mark Hughes has warned that sacking him and appointing a new manager will not necessarily improve Stoke City’s fortunes, as the club’s hierarchy continue to assess his future. If Stoke suffer a home defeat against West Bromwich Albion on Saturday, it’s likely to lead to Hughes being unemployed at Christmas.

Stoke, 16th in the Premier League and just one point above the relegation zone, have taken just one win from their last eight matches. David Moyes, who replaced Slaven Bilic at West Ham United last month, led his team to a 3-0 win over Stoke last Saturday.

But Hughes has dismissed the boost a new manager would have on his struggling side, suggesting that the grass is not always greener.

“Initially you get a manager bounce, but usually when you look at the stats it doesn’t make a great difference,” Hughes said at his pre-match press conference.

“Do you bring someone from the outside who doesn’t know the group, the frailties, the limitations, the strengths? Or do you continue with the guy that has worked with them solidly for a good period and knows what they are able to achieve? I know what my view on that is.”

Hughes insists he is the man to turn things around at the club, and Stoke’s board retain the belief that the Welshman, appointed four years ago, is capable of guiding the team up the Premier League, while acknowledging that a run of poor results cannot be allowed to continue.

“We are not where we expected to be, we all acknowledge that,” the 54-year-old added. “I would be more concerned if I felt the side itself didn’t have the capability to put points on the board. I know this group better than anybody else and I know we have got the capability of picking up points. Before the West Ham game, like-for-like results, we were ahead.

There is a sense of underachievement, but senior figures at the club also have some sympathy for Hughes because of the poor refereeing decisions that have gone against Stoke in recent weeks, including the penalty Manuel Lanzini controversially won for West Ham last weekend. Lanzini was subsequently given a two-match ban for diving.

“We need a level playing field,” Hughes said. “We’ve been hurt by refereeing decisions of late. Key moments in key games have been affected by decisions the referee has made. The lad has got sanctioned for diving, rightly, but the only group that haven’t had the benefit of that are ourselves.

“That needs to change, the referees need to step up and get decisions right. It doesn’t seem that it’s correct. It may change with video referees coming in. Maybe that’s something to be applauded that they actually realise there’s a problem and are trying to do something about it. Maybe because the offence was against us he shouldn’t be allowed to play against us in the return game.”

Second-bottom West Brom, who could welcome back wingers Matt Phillips and Nacer Chadli at the bet365 Stadium, badly need a result too, having failed to take victory from any of their last 17 matches in all competitions.