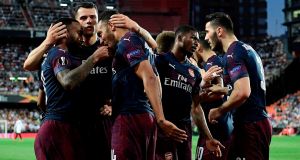 Pierre-Emerick Aubameyang celebrates a goal with his Arsenal teammates at the Mestalla stadium in Valencia. Photograph: Getty Images

The madness came to an end at Mestalla, where Pierre-Emerick Aubameyang and Alexandre Lacazette imposed order and carried Arsenal into the final of the competition their manager has made his own. Few have embraced it like Unai Emery, who insisted that it is a title, not merely a ticket to the Champions League in which his two strikers really should play – and one to which they may now return. Here they were a level above the rest, ensuring that a week of extraordinary European emotion, of barely believable events, drama to the last, did not extend into a third day. At least not here.

Instead, this was three men doing what they have done so often. Three goals from Aubameyang and one from Lacazette, who between them have 10 of Arsenal’s last 13 Europa League strikes, mean that Arsenal will be in Baku, 4,230km from here. They also mean Emery will be in another final: this was his 19th consecutive Europa League tie without elimination. He had not been knocked out since a semi-final here in 2012. He talked of the importance of Arsenal trying to win a third European title in their history; if they do, he will win his fourth.

Emery had been back and beaten Valencia in another semi-final here with Sevilla in 2014, his effusive celebrations earning him their animosity. Now, he has done it again, that early hope evaporating, dreams of another astonishing comeback gone.

“Yes, we can!” Valencia’s fans chanted. They quickly believed they could too, opening the scoring after only 11 minutes. Ainsley Maitland-Niles had struck but Neto saved and suddenly the Arsenal wing-back was running the other way, destined never to catch up. The goalkeeper began the move, Dani Parejo continued it and then came Rodrigo, who looked for Gonçalo Guedes dashing into the space left by Maitland-Niles. Rodrigo overlapped and it was his ball across the face of the six-yard box that Kevin Gameiro turned in at the far post.

The Mestalla exploded; it seemed reasonable to wonder if Arsenal, under pressure, might implode. That wing, where Guedes flew and Rodrigo bent his runs to head out there and join in, was a motorway along which they picked up speed. Although they had given the ball away early, passes missing targets as if tied up by tension, Valencia had already escaped along that route twice, the pitch opening before them, with Ezequiel Garay heading over and Guedes putting another effort over the bar. And now the momentum really was theirs.

A moment later, the ball dropped for Rodrigo, whose shot was accidentally blocked by Gameiro. Soon Rodrigo was there again, controlling Daniel Wass’s pass on the chest and flashing his shot just past the post. This was on – only almost immediately it was off again. The equaliser was a thing of startling simplicity, born of a long, long goal kick from Petr Cech. Gabriel leaped to reach it but headed straight up in the air. When, at last, it came back down, Lacazette jumped with him and headed it beyond Gabriel and Garay. It sat up just outside the area and Aubameyang hit it superbly with the outside of his boot into the corner for his 27th of the season.

Arsenal’s goal, like Valencia’s, had come seconds after an opportunity at the other end – and at first that felt telling, an indication of two teams happy to run into space, quick on the counter, and perhaps vulnerable defensively. It was also, of course, a warning of how fast things can change: from Arsenal’s first meaningful approach to Valencia’s first goal, from Valencia almost making it 2-0 to the shot that made it 1-1.

Except that Arsenal settled now, the goal giving them security. If the threat never entirely went away, with Parejo bending a free-kick just past the post, Arsenal began to take a degree of control. Every time Aubameyang was in possession, his opponents backtracked in concern and Özil appeared. Aubameyang should have done better with one shot just after the half-hour mark and then brilliantly set up Lacazette, whose first-time effort raced past the post taking a layer of paint with it.

When the ball came to him in the 50th minute, it ended the other side of the post and the tie effectively ended too. Again, Aubameyang ran. José Gayà went with him, matched him for speed and made the challenge but the ball escaped the left-back and he watched as Aubameyang accelerated again. The ball broke to Lucas Torreira, whose crisp pass reached Lacazette inside the area. The feet were fast, the turn faster, and the shot zipped into the net. Valencia got one back when Parejo and Wass created the opportunity and Gameiro scrambled Rodrigo’s shot past Cech eight minutes later, but they still needed three more. And, although Garay’s long-range shot flew just past the post and Valencia started to apply the pressure, time was not on their side. It was Arsenal, escaping their area, who struck next. Aubameyang again.

And there was still time for one more, right at the end. A wonderful shot, rising into the net for a hat-trick. There was applause now, appreciation from the Mestalla. Their journey is over, Arsenal’s has one more stop.