All in the Game: Getting to the bottom of Wembley’s massive lasagne 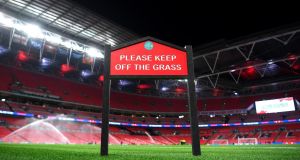 We’re guessing that most of you have heard by now about the WhatsApp message sent by London software salesman Billy McLean last week in which he claimed that his sister’s boyfriend’s brother, who, of course, works for the Ministry of Defence, told him that a “massive” lasagne was being cooked on the Wembley pitch - the underground heating would bake it and “then they’re putting the roof across and that’s going to recreate the oven” and then they’re going to “lift it up with drones and cut off little portions and drop it off to people’s houses”.

It sounded like a perfectly sensible project to us, but Billy confirmed to The Guardian that he was just taking the mickey out of the bonkers stuff doing the rounds on WhatsApp of late. But, having sent his message to around 30 pals, he was a touch taken aback to learn that half the country had been informed about Wembley’s, em, lasagne plan in no time at all.

“If someone sitting at home in their boxers selling software can save a one-minute clip and make it go viral, you’ve got be aware that anyone can put anything out and it might not be valid,” he said. Indeed.

Still, it all lead to our very favourite headline of the week: ‘FA confirm they are not turning Wembley into a giant lasagne after viral WhatsApp audio.’

Yes, an English newspaper actually rang them to check if it was true. These are wacky times.

“The more you stay at home, the faster you get out of the problem - otherwise in 2040 we will still be here. So, stay at home, watch movies and have children.” - Former Italian international Antonio Cassano advising the planet to go forth and multiply its flick-binging and baby-making.

Man of the Week

We’ll go with Pescara coach and former Juventus defender Nicola Legrottaglie. Why? Have a read: “[Britain]. Enviable in the Premier League or in rugby, enchanting with its double-decker buses and black taxis, lovable in the writings of Shakespeare or Dickens, superb in the music of the Beatles and the Rolling Stones, admirable minds like Newton or Darwin. The old Darwin, that is, the new one a little less - [Boris Johnson] proposes natural selection as a solution to the coronavirus. Herd immunity ordered…. those who have the age and strength to survive will go on… Italy has many flaws. We struggle to stand in line, maybe we litter our streets sometimes, but we do not entrust the natural selection of our population to a virus. Our interpretation is: ‘If a man has a hundred sheep and one of them is lost, will he not leave the 99 in the mountains and go looking for the lost one?’”

0 - The amount of truth in that report about Cristiano Ronaldo’s Lisbon hotel being turned in to a hospital. “We are a hotel. We are not going to be a hospital. I wish you a nice day,” as an entirely fed up spokesperson replied to the 15,836,235th enquiry on the matter.

No doubt, Lazio’s Ciro Immobile after he heard the comments of British ‘celebrity’ doctor Christian Jessen ….. who actually came out with this: “This might be a little bit racist …. but …. the Italians, any old excuse to shut down everything and stop work for a bit and have a long siesta. I think it’s an epidemic lived out more in the press than in reality.”

Over to Ciro: “Go tell that to the relatives of people who have died or those who are fighting for their lives in hospital: dickhead! I tell you this from the heart: **** off!”

A lion in a cage

Having experienced a lengthy spell in hospital last year after he was diagnosed with leukaemia, Bologna coach Sinisa Mihajlovic is finding self-isolating less of a challenge than most, the 51-year-old Serb admitting that he actually enjoys locking himself away and having limited contact with the outside world. “I’m a bit anti-social, it doesn’t bother me to avoid many contacts…. I often say - jokingly - that I will keep this precaution for the next five years,” he told La Gazzetta dello Sport.

He conceded that self-isolating is an ordeal for the majority of people, not least his wife - “she looks like a lion in a cage - she moves more than certain players on the pitch” - but ‘I spent months locked in a hospital room, nine square metres, attached to wires and drip, without being able to open a window. You think it’s a problem to be with your family at home and go out on the terrace to smoke a cigarette?”

His promise to the rest of us? “Afterwards it will be beautiful… and that afterwards will come soon.”

Make that man President of the World.

“Let’s together kick the coronavirus away and win this match! And remember: if the virus don’t go to Zlatan, Zlatan goes to the virus!”