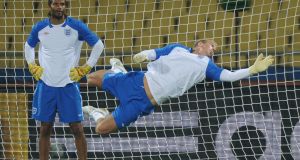 Coldest Interview of the Week

We’ll go with the one Fabio Capello did with the Guardian’s Sid Lowe, during which the Italian reflected on his time as England manager.

Having bemoaned the fact that he didn’t have a heap of useful youthful players at his disposal, along the lines of “Harry Kane and Raheem Sterling”, Capello then talked of his misfortune on the goalkeeping front.

“I’ve always had bad luck with goalkeepers internationally,” he said, referring to his England options for that position, mainly Rob Green, David James and Joe Hart.

After Green’s clanger against the USA in the 2006 World Cup, that was him dropped. “Everyone makes mistakes. He made one, so I changed. I put in Calamity James.”

No kidding, he actually referred to James by his rather unkind nickname.

“I asked the players. Hart or Calamity? ‘Calamity.’ I put Calamity in because of the players’ trust.”

On reflection, the one you have to feel sorriest for in this anecdote is Hart. Imagine your team-mates preferring a goalkeeper called Calamity to you?

“The only thing I’d ask for when leaving is a couple of tickets for the next Euros when we qualify.” And with that, Mick McCarthy was off. Not a dry eye in the house.

762: That’s how many million pounds Premier League clubs face losing in broadcast revenue if the season isn’t completed. No wonder they’re a touch keen to kick on.

On the whole, considering the times that are in it, people are being quite nice to each other, so when Karim Benzema was asked last week how he rated his compatriot Olivier Giroud, we fully expected something along the lines of:

‘Olivier is a legend, a selfless warrior with a footballing brain the size of a melon.’

Tsk. Be nice Karim, be nice.

“We miss football... but now is the time to listen, to follow our scientists, doctors and nurses.... we’ll come back from this stronger, better, kinder ... and a little bit fatter.” Pep Guardiola anticipating a surge in new Weightwatchers customers.

“Bruno is as obsessive as Ronaldo in body care and nutrition. At the end of training he drinks quail eggs, selecting them with great attention - he discards those that float and chooses only those that are full.” Parma coach Roberto D’Aversa on the lengths 39-year-old Bruno Alves goes to to keep his body in good nick. Ugh.

“We need to let the grief and pain pour out. There needs to be respect for those who have suffered. You can’t go from the cemetery to the stadium in a day, from a convoy carrying 150 coffins to an ole.” Former Italian coach Cesare Prandelli poetically responds to those keen to see a speedy resumption of the football season.

Entrepreneur of the Week

That would be retired goalkeeper Benedikt Pliquett whose three sex shops in Hamburg are still open for business and, by all accounts, are doing a roaring trade. But it’s not just down to the demand for his regular products, Plique is now stocking other much sought after items. Like? Toilet rolls. Yes, he’s flogging loo roll.

‘Plique Blinders’ was the rather exceptional headline The Sun chose for this story, although their use of ‘German Ace’ might have been generous. He played less than 100 games in the course of a career at St Pauli, Sturm Graz and “Spanish minnows Atletico Baleares”. As a businessman, though, he’s certainly ace.

Humanitarian Gesture of the Week

That’ll be the ‘buy three, get one free’ offer made by former Colombian international Faustino Asprilla who, since retiring, has moved in to the condom-making business.

“Suddenly filling the world with children during this virus will not be helpful,” he tweeted. “I only have 3,580,000 condoms left in stock until we can reopen the factory, so to help with the population situation, I am going to give away a condom with every purchase of a box of three.”

Not only is he a generous man, he’s modest too.

“Here at home I have a lot of condoms which I want you to help me use, because it is really difficult for me to use them all.”

1 Sideline Cut: Vignette shows why Bird is the true shark in The Last Dance
2 Liverpool and Everton to oppose plans to play games at neutral venues
3 Farrell and O’Connell provide insight into changes in Ireland’s analysis
4 Anfield and Cheltenham show sports again lacking in looking after their own
5 Niyi Adeolokun and Tom McCartney among Connacht departures
Real news has value SUBSCRIBE
Crossword Get access to over 6,000 interactive crosswords