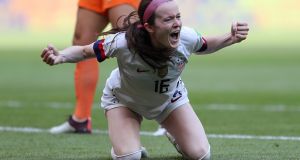 Rosemary Kathleen Lavelle of the USA celebrates after scoring her team’s second goal in the World Cup final. ‘She wouldn’t look out of place in downtown Ballyhaunis.’ Photograph: Richard Heathcote/Getty Images

When he was chatting pre-match with Tony O’Donoghue and Ruth Fahy pitchside in Lyon, a wilting George Hamilton was reminded of the temperatures in the stadium in Pasadena for the 1994 World Cup final when, he told us, his stopwatch actually melted. Brutal conditions in southeast France, then, which made the absence of even a bead of sweat on Megan Rapinoe’s brow when she stepped up to take that penalty positively supernatural, the woman looking nonchalantly chilled about an ordeal that should have had her in a puddle of perspiration.

They’re a different breed, this USA bunch. “We’ve no quit in us, we’re so tight, and we’ll do anything to win,” as Rapinoe told her interviewer come full-time, by which point she and her comrades had retained the World Cup at a canter, despite early resistance from the Dutch.

The triumph-sealing goal came from the Energizer Bunny that is Rosemary Kathleen Lavelle, a warrior who you would very much like alongside you if you ever happened to find yourself in the trenches. Her siblings, incidentally, are called John, Nora and Mary, so our notion that she wouldn’t look out of place in downtown Ballyhaunis would appear to contain some family-tree substance. And parochial-ish as it might have been, Darragh Maloney was perfectly entitled to wonder aloud if we could claim even a bit of her as our own.

And even a bit of her would do. Aside from her being one of the best midfielders in the world, and this particular couch’s most loved player of the tournament, one particular tweet of hers made us heart her even more: “Life is great, but it does suck that there’s no way for dogs to understand that the reason we’re not sharing our chocolate with them is actually out of love and not hate.” That she understands the sadness in your Lab’s eyes when you fail to share your Curly Wurly is all we need to know. Total ledge.

Anyhow, as we know, the US of A were kind of the Dubs of this tournament, everyone saluting their ruthless excellence, if a little begrudgingly, but most everyone hoping they’d fall flat on their collective faces. In that sense, the Netherlands were the Mayo of 2013, 2016 and 2017.

Hopes, of course, were high over on the BBC when England squared up to the USA in the semi-finals, so in light of their defeat, the pre-final mood was subdued enough, Gabby Logan and co still in mourning after England’s exit. Although there was a certain lack of honesty about their analysis of where it had all gone wrong.

Forget Phil Neville’s tactics and an underperformer here and there, it was, quite obviously, all down to Jonathan Pearce for making it a nigh on certainty that Steph Houghton would fail to level the semi-final eight minutes from time:

England’s defeat to Sweden in the third place play-off was less painful, it being a third place play-off, or “a nonsense game” as Phil declared it to be, bringing bucketloads of opprobrium down on the fella. Before the game he’d said that if you look at a bronze medal in a certain light it would resemble a gold, thereby making you feel like you’d won the World Cup rather than finishing bottom of the top three. After losing to Sweden, though, it was a case of first is first, second is nowhere, third is morto.

If the USA had finished third, they’d most likely have surrendered their boots at Charles de Gaulle airport and gone into exile. But mission accomplished.

What worked well was the postmatch chat back on RTÉ where Lisa Fallon, Emma Byrne and Richie Sadlier were given time to pick their team and moments of the tournament.

Richie swam against the tide when he opted for Rapinoe and her team-mates’ celebrations after she had made it 9-0 against Thailand. “Ruthless . . . they never took their foot off their throats . . . they didn’t care about all the other fluffy stuff,” he said in reference to the pearl-clutchers offended by the absence of mercy. (Guilty, m’lud).

Emma’s moment? When Thailand scored a consolation goal against Sweden, the only time they troubled the net in the tournament. “Softie,” said Richie’s grin. “Stony-hearted fecker,” Emma’s face smiled back.

And Lisa chose Marta’s end-of-tournament interview when she implored young girls to pick up the baton. “Cry in the beginning so you can smile in the end,” said the Brazilian.

You’d have half a notion they might just do that after this World Cup. Mighty stuff.