TV View: There are no easy games even against an ‘awful, awful team’ 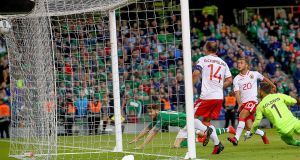 Ireland’s team bus breaking down on the way to the stadium wasn’t the most auspicious of starts to the evening, ominous even, although you would imagine the driver was relieved it wasn’t Roy sitting behind him when the engine gave up the ghost.

Mick seemed reasonably chilled about it all when he spoke to Tony O’Donoghue pre-match, in a “these things happen” kind of way, and at least the squad didn’t have to complete their trip on the No 47, another coach coming to the rescue.

And after Richie Sadlier had analysed the Gibraltar team, having, presumably, drawn the short straw before the panel went on air, 47 is roughly the number of Irish goals we might have been anticipating. “Some people say they’re improving . . . maybe they are, but they’re still an awful, awful team,” he said.

He conceded that the goalie was half decent, and that Tjay De Barr, who sounds like he plays his hurling with St Finbarr’s, was nippy, but other than that he wasn’t impressed. “I could go through the rest of the team, but I don’t think anyone’s interested.” Liam Brady and Didi Hamann were possibly terrified Darragh Maloney would ask them to complete the analysis of the visitors’ starting XI.

Richie added that Gibraltar’s Jack Sergeant played for West Didsbury and Chorlton in the North West Counties League, his “see what I mean?” shrug likely to earn him a strongly worded email from the club’s secretary. His conclusion was “you’re meant to say there are no easy games in international football, but . . .” And it was a monster but.

Mind you, when Tony asked Mick what he made of Gibraltar, he stopped just short of likening them to Brazil circa 1970 – “Damned hard-working, belligerent, a bit of pace on the break, free-kicks excellent, corners excellent, they’ve got a long throw” – so we had to recalibrate our expectations.

The non-appearance of Matt Doherty in Ireland’s starting line-up left Liam feeling a little grumpy, but he expected a triumph of large enough proportions, if not by 47. “At least three, four goals,” he demanded.

Over to George and Ronnie, neither of whom knew what to say when the camera picked out a lady in the crowd wearing an “I’m Wanted in Gibraltar” T-shirt, so they said nothing, although if anyone from Interpol was tuning in, presumably she was in handcuffs by half time.

Off we went and it only took two minutes for Ronnie to display his Nervous Nelly tendencies, David McGoldrick firing wide, after being put through by a nifty Scott Hogan touch, giving him the jitters. And those jitters didn’t ease over the next 27 minutes during which time we learned there are no easy games in international football. Certainly not for our lads,

But finally, deadlock in smithereens, McGoldrick’s corner-flag bound shot turned home by one of Gibraltar’s two Chipolinas. It wasn’t quite Brazil circa 1970, but , look, Carlos Alberto’s wonder-strike in that year’s World Cup final and the Chipolina lad’s own goal both counted the same on the scoreboard.

Half-time. And once again in the ads we saw Séamus Coleman stealing an apple from Spar when the fella looks like butter wouldn’t melt.

Liam, meanwhile, was melting with frustration, channelling Cilla Black when he told us there was “some decent stuff, but a lorra lorra bad stuff”. And what he wanted even more than goals was the sight of an Irish dribble having not witnessed one since, possibly, the day Damien Duff retired his boots.

Second half. As a game of football it might be fair to say it was no oil painting. Of the Irish performance you can only call to mind the assessment of former Manchester United (second choice) goalkeeper Anders Lindegaard when asked a couple of days ago to describe David Moyes’s attempt to succeed Alex Ferguson: “Like trying to charge an iPhone with a Nokia charger, it just slowly went flat”.

“Much ado about precious little,” said George of the contest, although Robbie Brady at least put a lick of gloss on the scoreline by doubling it at the death. Ronnie was ecstatic (kidding). “Yeah, three points, [sigh] . . . I suppose that’s what we wanted at the end of the day.”

Top of the table

It was indeed, and top of the table are our lads as they head for the beaches, somewhere Didi evidently wished he had gone before kickoff.

“It was haaaaaard werk . . . and it was a haaaaaard watch,” he said, stopping just short of likening our boys to West Didsbury and Chorlton.

Darragh tried to think of reasons why the display hadn’t been scintillating. A long season, the bus?

But look, the wheels on our campaign are still going round and round, so, as the most criminally overused phrase in the current sporting lexicon goes, come September “we go again”.

How do Klopp’s Liverpool measure up against greats of past? 22:00
FAI to allow Limerick apply for licence to play in First Division 21:51
Welcome to Iten in Kenya – home of champions and cheats 20:00
Latest weekend Premier League team news 19:15
Centuries from Pope and Stokes put England on top of things in third Test 18:49