Patrick Madden: If football resumes behind closed doors, is it really football at all? 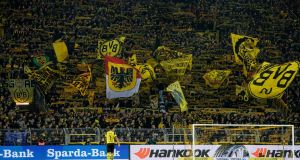 Saturday, May 16th. Borussia Dortmund against Schalke. Football is back.

The news the German Bundesliga would be returning to action has come as a sweet relief for many. It might not be much, but it’s something.

Something to watch, something to talk about. Something to offer a brief release from the reality of a global pandemic – however fleeting.

But there is a great irony in the fact it is the German top flight which will be first the of the ‘big’ leagues to resume.

German football prides itself on fan culture. There might be more money in England or Spain, but in Germany, there’s soul. Think of Dortmund’s yellow wall. Packed terraces at Union Berlin. You can go to the match, have a beer and a hot dog and still have change from €20.

Without supporters, German football doesn’t have the same pull. Yet around the world people will be fixed on the Bundesliga on Saturday, watching 22 men kick a ball around an empty stadium.

There is a dark edge to the desperation for the Premier League to return as soon as possible. A lot of people stand to lose a lot of money, something which has taken a precedence over people’s health.

As sinister as it may be, the push for football to resume also reflects how integral it is to people’s lives, its importance to communities and culture.

But if football resumes behind closed doors, is it really football at all?

Last month marked the 17th anniversary of Manchester United beating Real Madrid 4-3 at Old Trafford, as Brazilian Ronaldo dumped them out of the European Cup.

My dad and I were reminiscing about it – but none of our memories were about the football. It was what happened off the pitch which is ingrained. The floodlights, the romance, the guttural noise and humour and defiance of the crowd. The standing ovation when Ronaldo was substituted.

Because football is so much more than the 90 minutes played out on the pitch. Football is sensory – it’s the smells and the sounds and the tastes, it’s what you see and hear.

Football is who you go with and who you meet. It’s seeing the green pitch for the first time as a child and being hooked for life.

Football is burgers and onions. It’s walking to the ground and seeing the floodlights. It’s fanzine sellers and swagmen and police horses and the click of the turnstile.

Football is Dublin airport on a Saturday morning, thousands of people supporting different teams but all on the same sacred pilgrimage.

Football is meeting your mates for pints in town, risking one more before someone says ‘right lads, kick-off’s in 15 minutes.’

Football is a last-minute winner. It’s hugging a bloke who’s 20 years older than you and 20 stone heavier, both caught in the moment and sharing the greatest ecstasy life can provide.

Football is freezing in the depths of January, having a sip of dad’s Bovril and turning your nose up in disgust as you take another chomp of Mars Bar.

Football is forging friendships. It’s old mates and new mates and it’s nodding at the same person you see every week – you don’t know their name, but it doesn’t matter.

Football is being an away fan. It’s the nervous excitement swirling in your stomach knowing you’re behind enemy lines.

Football is ringing grandad after the match to moan about how rubbish we were and always getting an honest but sympathetic response.

Football is ringing grandad after the match to eulogise about how great we were, and how we’re going to win the league, and being allowed to revel in the moment.

Football is how you track time. It’s how you remember things. It’s how you know where you were and what you were doing and it’s all because a sack of leather was rustling around a goal net.

As the great Bobby Robson wrote: “What is a club in any case? Not the buildings or the directors or the people who are paid to represent it. It’s not the television contracts, get-out clauses, marketing departments or executive boxes.

“It’s the noise, the passion, the feeling of belonging, the pride in your city. It’s a small boy clambering up stadium steps for the very first time, gripping his father’s hand, gawping at that hallowed stretch of turf beneath him and, without being able to do a thing about it, falling in love.”

And here we are, stuck in lockdown, desperate to see that glowing green turf once again.

It’s something. But it won’t be the same.