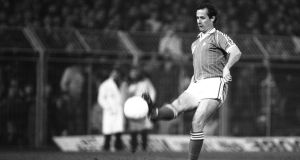 The match against USSR was Liam Brady’s debut for Ireland. Photo: Billy Stickland/Inpho

At a time when the world’s health and safety is so no joke it’s startling to hark back to times when ‘Elf & Safe’y’ wasn’t even a punchline yet.

Like when RTÉ dusted off its tape of the 1974 European Championship qualifier between Ireland and the Soviet Union at Dalymount Park.

It’s the one with Don Givens’ hat-trick and Liam Brady’s debut.

Brady is 18 and sporting a wild mane more redolent of heavy-metal roadie than future superstar. The Soviets seemed to spend much of the match staring transfixed at this thing that looks like it has crawled up Brady’s back and paused for a rest on top of his head.

The visitors couldn’t afford to be distracted.

Even in ancient replay there’s a brooding oppressive tension about that grey day in Phibsborough. The Soviets wanted wide-open steppe. Instead they found themselves in an anarchic Irish ambush even wilder than Brady’s thatch.

The place was a zoo, a burbling swarm of humanity crammed together sideburn to sideburn. Today it would be a huge heaving claim waiting to happen.

From the maniacs prancing on top of the stand, to thousands squeezed in underneath dicing with the roof caving in on top of them, as well as hundreds of flared chancers careering onto the pitch at will, no one, clearly, gave a fiddler’s about any kind of social distancing.

Givens got engulfed by the crowd the first time he scored. Cops can be seen shifting nimbly to the side as the men behind the wire charged in celebration.

Today there would be a tribunal about it. Back then everybody went ‘tonto’ for a minute, flicked a few ‘V’ fingers at the Soviets and eventually ambled back across the lines for a smoke.

Then Terry Mancini and a Soviet player got sent off for fighting. Not shaping to fight but actual digs. Both left the pitch wiping blood off their faces. It only added to an intoxicating wildness that now seems almost primeval.

At the end the frantically energised crowd invaded the pitch. Givens could be seen sprinting for the sanctuary of the dressing room. Today his lawyer would be pleading emotional distress, backed up by a ‘HR’ appointed psychologist. Back in 1974 it was enough to take your chance.

From the perspective of 46 years later it all looks rather wonderful. So let it be said was a lot of the football Ireland played.

The same can’t be said about the 1990 World Cup and that iconic second round game in Genoa where Ireland beat Romania on penalties.

TG4 showed the whole game on Friday. Packie Bonner supplied a bilingual introduction. It would have been merciful to skip the couple of hours between that and his penalty shootout heroics. But needs must when there’s air-time to fill.

As a spectacle the game was dire. The Irish fans were great. Ireland’s football wasn’t. After 30 years it’s surely safe to say it Romania should have won.

The idea of watching it cold, with no atmosphere to dull the pain, would have some of us jumping off something high.

The overriding impression was of grim stoicism from those taking part and commercial urgency from those behind the scenes.

Beforehand football’s most charismatic German, the Liverpool manager, Jurgen Klopp, was characteristically upbeat about the game resuming in a top European league.

Ordinarily it would only be expected for a manager in Klopp’s position – miles clear in the Premier League and awaiting coronation – to argue for a quick resumption in England too.

However Klopp has enough points in the bag as a functioning human being to be cut some slack.

Quizzed on BBC’s Football Focus he said games behind closed doors – or “ghost games” – are hardly ideal but perfectly doable.

“We all started playing football without supporters. We love this game not because of the atmosphere in the stadium,” he told Dan Walker.

“Meanwhile we are used to it and we know that’s the real football. But now we can’t play like this for a few months hopefully only. So it doesn’t mean the game isn’t a wonderful game and I hope it really works out in Germany,” Klopp added.

So do we all, and not because there are billions tied up in it. The return of any kind of sport signals a return of some kind of normality.

But if there’s a lesson for football’s administrators in all this it is that spectators are inextricably part of the package they lucratively flog to telly.

1 Next stop the Champs-Elysées in green for Sam Bennett
2 Lance Armstrong’s latest move serving him well on many fronts
3 Saracens’ emphatic opening salvo enough to keep Leinster at bay
4 Saracens deliver the brutal blueprint on how to beat Leinster
5 Maro Itoje proves he has no peer in the northern hemisphere
Real news has value SUBSCRIBE
Crossword Get access to over 6,000 interactive crosswords