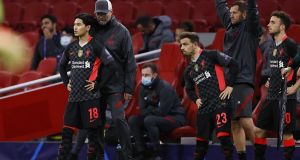 It wasn’t so much Ajax’s 1-0 defeat to Liverpool in last week’s Champions League game in Amsterdam that irked a section of Dutch punditry, it was Jurgen Klopp’s decision to take off his entire front three of Sadio Mane, Roberto Firmino and Mohamed Salah in the 60th minute, replacing them with Takumi Minamino, Diogo Jota and Xherdan Shaqiri.

Now, to most onlookers, this might have seemed a bit of an unusual move, but hardly one that would justify picking on Klopp’s character and teeth. Was it insulting to Ajax? Well, the three lads who came on cost over £60 million between them, so it wasn’t like they were from the club’s under-eight team.

But TV pundit and former coach Jan Boskamp was peeved. “I was annoyed by one thing: that Liverpool suddenly changed the three front players. Basically the three best players - and he takes them out. What kind of guy is that, dude? Come off it. The arrogance ran off that guy’s face.”

Columnist Henk Spaan, writing in the newspaper Het Parool, put that criticism in the ha’penny place. “I thought Jurgen Klopp was a funny guy with vain streaks, but in the Arena, those streaks got the upper hand. What did he want with his change of Salah, Firmino and Mane? To humiliate Ajax? Yell at the empty stands, ‘I’m Klopp, I dare to do this!’ We have a word for it in Amsterdam: weirdo. Maybe those bleached teeth are blackened by his German bile.” What the......?

“We will wait for him like a good wife is waiting when the husband is in jail.”

Jurgen Klopp will be the first at the ‘prison gates’, you’d imagine, when Virgil van Dijk is released.

80 - That’s the birthday Pele celebrated on Friday. “In Pele’s 80 years,” said the humble man himself, “the only thing that’s missing is to land on the moon”.

“He is a player of openness, breadth, edge and one-on-one skills. The torque, the acceleration - it is impressive. He has extraordinary physical virtues. If a normal car has five gears, he has six or seven.” Let’s just say, Brazil boss Tite quite likes Real Madrid’s Vinicius Junior.

“He gets a lot of stick because he looks like a nightclub bouncer.” Burnley assistant manager Ian Woan on his boss Sean Dyche. He does too.

“Scotty played the first-half with one eye, that was the most impressive thing.” Ole Gunnar Solskjaer heaping praise on Scott McTominay for his performance against Paris Saint-Germain. Happily, it was just a contact lens he’d lost, not an actual eye.

Transfer of the week

We’ll go with the 18-year-old signed by Peruvian second division club Union Comercio. Not that we know a single thing about him, other than his name: Osama Vinladen Jimenez Lopez. And bear in mind, the letter ‘v’ is pronounced ‘b’ in Spanish.

Osama, which is what he has on the back of his shirt, explained to a local radio station that his father chose his name simply because he liked it and while he considered changing it once his football career took if, he opted not to. “I am calm about it,” he said.

“I think there is a person called Hitler also in Peru," he said. “Jesus saved the world and there are Jesuses who do harm. Because there is an Osama who killed people, I don’t think there has to be a law about the name. It draws a lot of attention, from what I see.”

Indeed. As does the name his father chose for his brother: Saddam Hussein. There’s a trend, here. His sister had a lucky escape, though. “My father wanted to name the third child George Bush, but it was a girl.” Mind you, she probably ended up ‘Georgina Bush’.

“Whenever you play against Fred you let him get the ball because he has to take three or four touches. He gets it facing the wrong way, turns, turns, chops, chops and he’ll give you the ball three or four times a game.” Watford’s Troy Deeney paying tribute to the talents of Manchester United’s Fred.

“It would be a pleasure for me to play with him because I have only ever played with him on Playstation.” Chelsea’s Jorginho making 38-year-old Petr Cech, who has returned to the squad as the fourth choice goalkeeper, feel even older.

“That he has to do it is a bit of a shame, but it’s wonderful as well. I hope his mother is really proud of him - I don’t know him, but I am.” Jurgen Klopp doffs his cap to Marcus Rashford for his campaign for free school meals.

1 Jim McGuinness: There is a way to save championship and make it competitive
2 Sordid murder of hurling brothers still resonates in south Galway
3 Nicky English: Waterford and Galway's task made harder by third week syndrome
4 Jackie Tyrrell: What ever happened to Austin Gleeson?
5 Klopp furious as injuries mount and VAR decisions prove costly
Real news has value SUBSCRIBE
Crossword Get access to over 6,000 interactive crosswords