Championship: Browne and McClean on scoresheet as Idah sees red 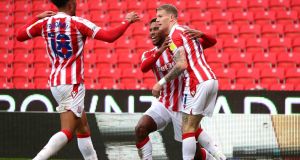 Reading moved five points clear at the top of the Championship with a 3-0 victory over Rotherham at the Madejski Stadium.

Yakou Meite struck in either half and Lucas Joao added a late third from the penalty spot to preserve the Royals’ unbeaten start to the season and condemn the Millers to their first away defeat.

Bristol City moved up to second after Nahki Wells’ late penalty secured a 1-1 draw against Swansea.

Jamal Lowe’s 51st-minute goal put the Swans in control at Ashton Gate, only for Wells to make no mistake from the spot in the 83rd minute.

Chris Mepham netted in the sixth minute of stoppage time to secure Bournemouth a last-gasp 1-1 draw against Watford and keep them unbeaten.

Stipe Perica marked his first league start with the opener after 12 minutes at Vicarage Road, but Mepham was on hand to fire home from close range at the death.

Stoke extended their unbeaten run to five league games with a 3-2 win over Brentford.

Steven Fletcher and James McClean put the Potters 2-0 ahead at the break before Tyrese Campbell added a third on the hour mark, with Marcus Forss netting twice in the final 20 minutes to set up a nervy finale.

Millwall drew 1-1 against Barnsley without manager Gary Rowett in the dugout at the Den.

Rowett recently contracted coronavirus and, after Alex Mowatt’s stunning volley gave winless Barnsley the lead in front of new boss Valerien Ismael, his side secured a point through Jake Cooper’s header before half-time.

The Chairboys looked to have sealed their first point of the campaign, having equalised through Scott Kashket following Teemu Pukki’s opener, but they were denied by Vrancic’s stunner, with Adam Idah then sent off for the hosts.

After Fraizer Campbell put the in-form Terriers ahead in the eighth minute, North End turned the game around shortly after the interval through Browne to secure their third consecutive away win.

Town had Naby Sarr sent off with 12 minutes remaining.

Adam Armstrong took his goal tally for the season to eight with a brace in Blackburn’s 4-0 victory at 10-man Coventry.

City had Michael Rose sent off after 15 minutes, leading to Armstrong’s opener from the penalty spot, with Liverpool loanee Harvet Elliott scoring his first goal for the club and then setting up Sam Gallagher.

Bottom-placed Sheffield Wednesday remain on minus four points after losing 1-0 at home to Luton.

QPR and Birmingham are without a win in six matches after a goalless draw.