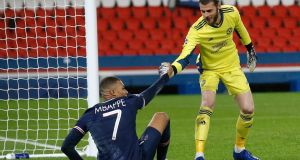 Manchester United’s goalkeeper David de Gea made a number of important saves during the win over PSG in Paris. Photograph: AP

Given the scale of the club and its history, it is surely inappropriate to describe United as a work in progress. That would feel like a contradiction; yet here they are, 15th in the Premier League, having just won 4-1 away at Newcastle. Here they are, assailed by doubtful looks, winning 2-1 in Paris in the Champions League.

United have become a series of questions and imagine if they lose at home to Chelsea today? Imagine if they win? Are United back? Can they challenge?

Prior to Newcastle and PSG, which was only eight days ago, Solskjaer was being instructed by plenty to drop De Gea and Harry Maguire and Paul Pogba and a few others. Challenge then meant something else.

United’s previous outing, after all, had been a 6-1 wallop at home by Tottenham. Solskjaer called it “embarrassing” and “my worst day” and he was not bathed in external sympathy. This was United’s second game at Old Trafford and the first, the season-opener, had ended 3-1 to Crystal Palace. An aggregate of 2-9 is no way to kick-start a campaign.

There was an unconvincing 3-2 victory at Brighton, too, when the hosts hit the woodwork so many times (old joke alert) the posts had to be taken to hospital. Yet some of a United stripe worked back from the final score and declared things all right.

Such people should be avoided. Victory seemed too strong a word for what happened at Brighton and to an extent it is the same with the latest two results. United brushed away a passive Newcastle at St James’ Park and then won narrowly at a disjointed PSG. There are reasons they won both games disconnected from Solskjaer.

Manchester United should be too big for this, and for ifs and buts

This, though, is a harsh examination of the two matches. In each De Gea made important, athletic saves; in each Fernandes was a consistent force, sometimes spectacularly; in each Marcus Rashford ran with freedom and menace. United’s collective stability enabled the individuals to flourish.

That one of them was De Gea says, of course, that not everything is tight. De Gea made a potentially game-changing save from Callum Wilson in the second half at Newcastle and was then reliable and assured in Paris. He was needed but his footwork was good and there were no glitches.

De Gea will be 30 in a fortnight, not old for a professional of his physique and he is contracted at Old Trafford until 2023. If he is back, then United will have regained a goalkeeper comparable in influence to Alisson at Liverpool and Ederson at Manchester City. Dean Henderson’s presence at Old Trafford appears to have had a stimulating effect.

Fernandes’ arrival is the same. The Portuguese midfielder is definitely an answer amid the questions at United. He has the talent and ambition necessary to be a leader at a major club and his two goals at St James’ – one disallowed – provided evidence of serious ability. In Paris, you could see Fernandes felt he was on a stage worthy of it.

Rashford has been the beneficiary of Fernandes’ passing in these two games. But he has done much on his own as well. To hear the United coaches shouting “Rashy, Rashy” at St James’ was a reminder of Rashford’s age – 22 – but if he is given the space to develop in terms of formation, Rashford will be some player by Fernandes’ age, 26. Rashford’s 87th-minute winner in Paris was a goal Neymar or Kylian Mbappe would have been delighted with. The final whistle there ended a smart four days for Solskjaer.

“Our season starts now,” he had said in Newcastle, which is a statement to ponder. And on Wednesday, off the pitch came another contradiction, this time of Rashford’s social activism. United’s financial results revealed a 20 per cent slump in revenue and yet the ruling Glazer family managed to take out €30m or so in dividends despite it.

It was another reminder that everything at the club is not aligned. There was a crass official tweet about St James’ Park before last Saturday, which was deleted.

Manchester United should be too big for this, and for ifs and buts. Yet they’re here with short-term reasons for Solskjaer to be cheerful and long-term questions about direction. Have the Reds recovered? The results are in; the results aren’t in.

Southampton know all about recovery. Only last Saturday they were 2-0 down at Chelsea after half an hour and 3-2 down after an hour. The Saints still got a 3-3 draw. They recovered.

As stated, they know about this. Sunday brings not only the highflying Blues of Everton to St Mary’s, it brings the anniversary of Southampton 0-9 Leicester City.

A result of such historic desolation could have dragged the Saints down and manager Ralph Hasenhuttl informed his superiors that night he would be unsurprised if they dismissed him.

But instead Southampton supported Hasenhuttl. The club trusted his record as a coach who can inspire change, as he did at Ingolstadt and Leipzig previously. It was a strong decision and one year on Southampton are stable. Hasenhuttl has a new four-year contract. They have recovered.

London witnessed another recovery escapade last weekend. When Tottenham raced three goals ahead in 16 minutes against West Ham, no-one foresaw that the Hammers’ late comeback to create another 3-3. Rather, people were wondering if it would be 6-0 or 7-0 and David Moyes said he was among them. He may also have been among those worrying if he would make it to today’s game against Man City.

For those who think the most interesting thing about West Ham remains their new stadium, their old one and the overall ownership of the club, this was a diversion. In Manuel Lanzini, Declan Rice and Michail Antonio, West Ham have players worthy of attention. Next up is Said Benrhama.

The clever, deft Algerian has Riyad Mahrez possibilities and he will be up against his compatriot. Should it go well, and Benrhama is really good, eventually there could be a lavish West Ham comparison too – with Dimitri Payet. Hammers’ fans might be able to focus on football.

1 Jim McGuinness: There is a way to save championship and make it competitive
2 Sordid murder of hurling brothers still resonates in south Galway
3 Klopp furious as injuries mount and VAR decisions prove costly
4 Jackie Tyrrell: What ever happened to Austin Gleeson?
5 Norwich denied three points as Coventry steal a point late on
Real news has value SUBSCRIBE
Crossword Get access to over 6,000 interactive crosswords