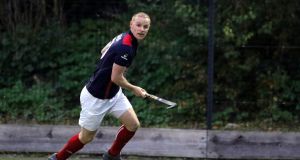 Clontarf’s Kevin Mullins: “For a few of the lads they haven’t had this kind of experience in their whole hockey careers.” Photograph: Deryck Vincent

Clontarf are gunning for a first ever senior title on St Stephen’s Day when they take on Three Rock Rovers in a Neville Cup decider (2pm, Grange Road) but they do not have to look far for winning experience on this stage.

Striker Kevin Mullins and assistant coach Gareth Borland have both won this title for the past two years in Three Rock colours, with Kevin’s younger brother John also picking up a medal in 2017.

All three returned to their club roots this summer and have played their part in a sublime campaign to date, winning nine out of nine Leinster league matches to date. Most recently they thrashed title rivals Railway Union 5-0 to go into pole position for the provincial crown.

However, how that form will translate into this cup decider is difficult to judge. Rovers cannot deploy their “top 13” EY Hockey League-registered players and so will have a panel mainly formed by their second string.

It means a mix of the experience of ex-internationals Mick Maguire and Peter Blakeney in tandem with rising stars like Matthew Sweetnam, Sam Walker, Ben Ryder, Harry Lynch and Evan Jennings.

Rovers have managed to get that balance right in the last two years in shoot-out wins over Pembroke and Corinthian, with goalkeeper Shane O’Brien starring both times.

Yet for Clontarf Kevin Mullins says there is a huge sense of occasion, an emotion his side intends to lean on.

“It is always a great occasion on Stephen’s Day with a great crowd,” he said. “It was one of my first big trophies and winning it for the first time was something I will always remember.

“With Three Rock it is kind of expected to be making finals whereas it is a massive occasion [for Clontarf]. There’s a buzz around the whole club, and it is a bit different. For a few of the lads they haven’t had this kind of experience in their whole hockey careers.”

He is also well aware of the extra level of importance to his role on such a stage having played in and won nine finals during his spell on the southside.

“We don’t have that depth or level of experience. There isn’t five or six lads playing international hockey – there are five or six lads we rely on, and if they don’t push standards things can sometimes not happen. So there is a bit of responsibility on my shoulders to set an example!”

Clontarf will be shy the services of drag-flicker Davyn Keuter, but Australian Jordan Edmonds is available for the contest.

Elsewhere, Cork C of I reached the Peard Cup final with a 3-1 win over Harlequins, with Simon Wolfe striking twice in the final quarter. C of I will face Bandon at Garryduff in their St Stephen’s Day decider.