Neville nails it after match, calling for action to combat racism in football 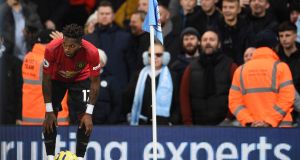 There’s a segment on Michael McIntyre’s Big Show called Send To All where he takes hold of a celebrity’s phone and texts a decidedly unanticipated message to every one of his or her contacts. And then McIntyre waits for the befuddled replies and reads them out.

It was Harry Redknapp’s turn to go through the ordeal on Saturday; McIntyre sending a text that had Harry saying he had just discovered emojis, the message jammed with examples of the things, including the one representing a pile of poo, before asking his pals “what emojis make u think of me and why?”.

“Uncle H, when did you learn to send texts let alone emojis,” asked his nephew Frank Lampard, although he finished his message with a diamond, which was exceptionally sweet. But Harry’s 10-year-old grandson sounded more concerned: “I really think you need to get back in to football management. Are you sure you’re okay?”

It is disgusting. Something has to be done

Come Sunday evening, Harry, who was last a gaffer two years ago, was appearing on All Star Mr & Mrs, such has been his lot since winning that Celebrity Jungle thingie, a largely positive experience for him apart from that moment he suspected he was eating “kangaroo wings”.

It was five years ago that Roy Keane revealed he’d met the Celebrity Jungle people to discuss appearing on the show, something some of us would have been happy to go down the pay-per-view route to see. “Nah, not for me,” he said in the end, but he didn’t rule out eating goat’s testicles alongside former Emmerdale actors and retired presenters of Bargain Hunt at some point in the future.

If you had Roy’s number after watching him in Sky Sport’s build-up to Saturday’s Manchester derby, you’d most probably have texted: “I really think you need to get back in to football management. Are you sure you’re okay?”

Bored witless, he was, and not even appearing alongside Harry’s lad Jamie and Micah Richards appeared to stimulate him. Instead, it was auto-pilot stuff, along the lines of why does Fred exist, why is Martial so lazy, and why is Scott McTominay being hailed as the new Messiah when he’s just a tall Andreas Pereira (we’re paraphrasing here).

He rose from his slumber, though, come half-time, reckoning he’d finally witnessed “a proper Man United performance”, even bringing himself to praise Fred. And McTominay. And: “They looked so dangerous and sharp, even Martial.”

Mind you, he stopped short of echoing Gary Neville’s declaration that United had been “Rampant! Relentless! Absolutely scintillating!”, having a hunch that it might all go pear-shaped in the second half, because United have been specialists in pear-shapedness of late. He couldn’t disagree with his colleague, though, when he addressed United’s 2-0 lead at the break. “If it stays the way it is,” said Micah, “United will win the game.”

While the second half was less exhilarating, it did provide the game’s finest moment, that time the camera picked out London-based Mancunian Noel Gallagher, and Gary just couldn’t resist. “He didn’t come from Primrose Hill to watch this.” As burns go, that was third degree.

The bulk of the post-match chat, though, focussed on the creature in the crowd who’d made those racist gestures towards Fred, Jesse Lingard and any other black United player he spotted in the vicinity.

Gary was excellent on the issue, pointing to the spectacular hypocrisy of berating eastern European countries, in particular, for their supporters’ behaviour when Blighty needs to take a hard look at itself.

As for Boris. “You are watching the prime minister’s debate where he is talking about migration to this country . . . it fuels it all the time. It has got worse over the last few years, and not just in football. “[That supporter] thinks he can come to a game and racially abuse someone playing football. It is disgusting. Something has to be done. It is not just about banning him from football. Everyone has a responsibility.”

One of the less anticipated mighty things about the evolution in TV coverage of football is that the profusion of cameras in grounds means very little goes unspotted. So, come Sunday, said supporter had been arrested and his name and face plastered all over the internet.

And he’ll, presumably, only to get to watch football on telly from here on in.

’Twas for him, perhaps, that emoji representing a pile of poo was invented.

1 Gordon D’Arcy: There’s more to Saracens’ success than money
2 10-man Arsenal show their heart to rescue a point at Chelsea
3 O’Donoghue says Limerick will let their hurling talk in 2020
4 Solskjær can’t guarantee Rashford will play again this season
5 Rowe and Dublin ready to get back down to business
Real news has value SUBSCRIBE
Here is your handy guide to sport on television this week

Seán Moran: More trouble as GAA votes one way and acts in another 07:00
Rowe and Dublin ready to get back down to business 06:00
Gordon D’Arcy: There’s more to Saracens’ success than money 06:00
Honeysuckle facing ‘different ball game’ in Irish Champion Hurdle 01:03
Funding row just ‘background noise’ for Mayo’s Diarmuid O’Connor 01:00