Saluting the sportspeople who didn’t have the sense to quit

TV View: Any of the winners at RTÉ awards would have been forgiven for giving up 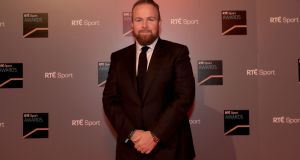 While some would have quibbled with the choice of golfer Shane Lowry as Sportsperson of the Year, on the whole we were grand with it. Photograph: Donall Farmer

It couldn’t but strike you watching the RTÉ Sports Awards on Saturday night that the one thing the bulk of the nominees had in common was that they appeared never to have heeded Homer Simpson’s eminently sensible life rule: “If at first you don’t succeed, give up.”

After blowing that four-shot lead going in to the final round of the 2016 US Open, Shane Lowry would have been forgiven for lobbing his clubs into the nearest lake, buying a little farm in Offaly and living a stress-free life tending to his turnips.

After the Dublin women’s football team lost three All-Ireland finals in a row to Cork and camogie’s Niamh Kilkenny lost four of her five visits to Croke Park with Galway (“I could write a book about losing All-Ireland finals”), if they’d any sense at all they’d have walked away.

After Rhys McClenaghan failed to make the final of the World Championships last year, twice falling off his pommel horse, and then needing surgery on a shoulder injury that would have made your knees wobble just reading about it, he should have concluded that life’s way too short for this.

After Denise O’Sullivan had the confidence drained out of her during a soul-destroying spell with Houston Dash, watching most of their games from the bench, she’d have been best advised to give up on professional football as a bad job and come home.

They’d have been wise to say adios to their respective sports, never darken the door of a gym/pool/track again

After the women’s hockey team missed out on qualification for the 2016 Olympics when they were beaten in a shoot-out by China, they should have set fire to their sticks and packed it all in.

After Ciara Mageean suffered so many injuries and Sanita Puspure so many medal-pursuing near-misses, they’d have been wise to say adios to their respective sports, never darken the door of a gym/pool/track again, nor ever set their alarms for earlier than 7:30am.

And after Tiger Roll was castrated in his youth, he’d have been justified in telling Gordon Elliott to “go jump the f***ing fences yourself”.

But here they all are, dripping in gold, silver or bronze, or laden with trophies, or with trips to Tokyo booked for next summer.

Now, granted, injuries and gut-wrenching disappointments – if not castration – are all part of sport; there aren’t too many of the greats who haven’t endured a whole bunch of them. But still, our lot seem to have extraordinary powers of bouncebackability, maybe none more so than Hall of Famer Sonia O’Sullivan. And if you didn’t choke up at least a little bit upon watching that montage that saluted her career, then your heart is made of granite.

These sports awards can, though, often prove divisive, families split between, say, their golf-loving wing and the boxing diehards, the judges’ choice of Sportsperson of the Year occasionally proving more controversial than the water charges.

But while some would have quibbled with the choice of Lowry, on the whole we were grand with it. It certainly wasn’t akin to 1954 over the water when Chris Chataway won the inaugural BBC Sports Personality of the Year, beating Roger Bannister in to second place.

Chataway had broken the 5,000 metres world record that year, while Bannister had, of course, become the first athlete to run a sub-four-minute mile.

Chataway winning the award, then, would have been much like Buzz Aldrin being named 1969’s Astronaut of the Year, pipping Neil Armstrong to the gong.

Anyway, that bit of the show that always leaves the heart feeling like it’s been compressed by a vise-grips is the “In Memoriam” section; although, curiously, it didn’t feature the FAI and its finances this time around.

Melancholic as it would leave you, at least the parts with grainy black-and-white footage pointed to lives lived well and long. It was when those more recent hi-res colour images of fresh-faced youngsters popped up on our screens – and Christ, so, so many of them – that you couldn’t but be left broken thinking about what their loves ones have gone through in the last year.

And 2019 was another marvellous year for Irish sport, but ever so occasionally we’re reminded to put it all in perspective.

May they all rest in peace.