Skerries 100 race goes ahead after William Dunlop killed in crash 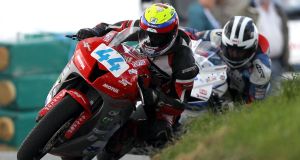 William Dunlop was practising for the Skerries 100 road race when he crashed on Saturday.

The Skerries 100 motorcycle road race has taken place in tribute to racer William Dunlop, who died during a practice run for the Dublin event on Saturday.

The 32-year-old from Northern Ireland died after he crashed on the race route near Skerries with his younger brother, Michael riding behind him.

The father-of-one was part of the renowned Dunlop racing family. His father Robert Dunlop was killed in the North West 200 in 2008, and his uncle former world champion Joey Dunlop died in Estonia in 2000.

Gardaí said Sunday’s race would go ahead as planned after the Dunlop family and motorcycle club said it would be a fitting tribute to the talented racer.

Liam Beckett, a former mechanic of Robert Dunlop and close friend of the family, said he was “heartbroken” over the tragic death.

Members of the public have been laying flowers at the feet of the bronze statue of Robert at the Dunlop memorial garden in Ballymoney.

Racing fans described their devastation in tributes left at the statue.

The annual Skerries 100 motorcycle road races will go ahead today as planned at the request of the Dunlop family.

Road closures in place from 8am this morning.

“William you were a gentleman and we will never forget you”, a member of the public wrote.

Tributes to the young racer have been flooding in from across Ireland.

On Sunday, Northern Ireland golfer Graeme McDowell said it was a “tragic situation”.

Speaking at the Irish Open in Co Donegal, said: “It’s such a dangerous sport, they stand in front of the camera and they know the dangers that face them out there but it’s in their blood and it’s what they love to do.

“My thoughts and prayers go out to the family.”

Rory McIlory said: “I think it’s unfortunate, what the family have been through has been horrendous.

“Everyone’s thoughts are with the family.”

DUP leader Arlene Foster said she was “shocked and saddened” by the racer’s death.

“Motorcycling was his life and he will forever be remembered for his many achievements, both in Ballymoney and across the world,” she Tweeted.

Northern Ireland road race champion Ryan Farquhar said on Twitter: “For us road racers it isn’t really a sport, it’s our life, a life we choose. We love it and know the risks, many don’t understand.”

William Dunlop missed this year’s Isle of Man TT to spend time with his pregnant partner, according to reports.

He enjoyed a distinguished career on Ireland’s national road racing scene, accumulating some 108 wins including four victories at the North West 200 and seven at the Ulster Grand Prix since beginning his career in 2000, according to trade site Autosport.

Joey Dunlop holds the record for the most Isle of Man TT wins with 26, and is regarded as “one of the greatest motorcycling legends of all time”, according to the race website, while William’s brother Michael has registered 18 wins on the course.

Lions tour will not take place in Australia this summer 11:39
England all in a spin once again as India seal the series 11:00
Kilmacud Crokes and a 25-year boom in women’s football 10:00
The story behind the amazing growth of women’s Gaelic football 10:12
Ulster’s new breed of backline boys can return silverware to Belfast 06:00