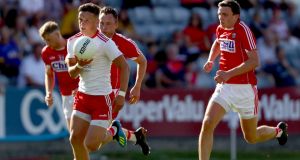 A slow death in the hot afternoon, Tyrone taking their time to run Cork into the ground and with that claim their golden ticket to the Super 8s.

They did break some sweat, mainly under the blistering sun, only once Tyrone got the run on Cork it was all too easy. On the back of Cork’s 17-point loss in the Munster final, this brings to 33 points their combined deficit in the last two games - a painfully fresh low for football in the county.

It was occasionally painful to watch too. After the rip-roaring victory for Roscommon over Armagh in the curtain-raiser, this played out in far more muted undertones, Tyrone always in control for what is their first championship win over Cork in three attempts.

Second half goals from Connor McAliskey and his replacement Ronan O’Neill and late on from Mark Bradley gave Tyrone all the breathing space they needed, as Mickey Harte’s team finished with 10 different scorers. Tyrone thus join Dublin, Donegal and Roscommon in Group B of the Super 8s quarter-finals: first up are Roscommon in Croke Park next week, and none of those three will fancy the trip to Healy Park.

McAliskey’s goal on 41 minutes was classic Tyrone: Padraig Hampsey won a Cork kick-out and caught McAliskey straight on the run, his thundering finish thoroughly unstoppable. Bradley’s goal followed on 51 minutes and by then Tyrone were 2-16 to 0-10 in front.

In truth Cork were no match for Tyrone’s skill and touch of class, and typically stubborn defence; in contrast Cork’s first touch let them down too often, Ian Maguire and Brian O’Driscoll handling barrels of ball around midfield only not always in productive ways. They also lost Mark Collins to a straight red card on 61 minutes for a strike on Conor Meyler as Cork’s heads dropped.

Cork came in off that 17-point Munster final defeat, their biggest loss to Kerry in 80 years, although started out in relatively good spirits. Mark White denied Tyrone two clear-cut goal chances in the opening 10 minutes, but still Cork were struggling a little with the pace of the game, Niall Sludden, Frank Burns and Colm Cavanagh helping Tyrone build a three-point lead, 0-4 to 0-1.

Cork briefly rallied with two goal chances of their own, Niall Morgan directing Michael Hurley’s shot over the bar, before Cork levelled it again on 22 minutes. After four unanswered points, and later a free from Connor McAliskey, Tyrone were double scores at the break 0-10 to 0-5.

Even at that stage the writing was on the wall. Tyrone’s momentum with wins over Meath, Carlow and Cavan since their Ulster defeat to Monaghan stood to them, and could do for a while yet. It also brings Tyrone’s winning qualifier record to 28 wins and only four loses, since the so-called back door was introduced in 2001. They’re right back exactly where they want to be.