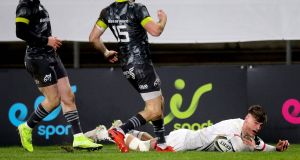 Ulster’s Ethan McIlroy scores his side’s second try of the game during the win over Munster. Photo: Ryan Byrne/Inpho

Three Irish provinces were unbeaten going into derby matches in the Guinness Pro14 but only Ulster preserved that status by virtue of a hard fought 15-10 victory over Munster at the Kingspan stadium. Connacht brought Leinster’s 26-match winning sequence in the league to a halt with a stunning 35-24 win at the RDS, a first triumph in Dublin since 2002.

Irish rugby’s sibling rivalry continues this weekend and it is arguably more pointed as conference rivals square off when Leinster host Ulster at the RDS on Friday night (7.35) and 24 hours later Connacht welcome Munster to the Sportsground (7.35).

Dan McFarland’s Ulster are 10 points clear in Conference A having played two games more, something that he wouldn’t have anticipated going into last weekend’s matches. Despite Leinster’s surprise defeat he understands the difficulty of the assignment that they face in Dublin.

“Are we good enough? We can do it, definitely. The probability of it? You only have to ask the bookies, have a look at what the odds are next week. They’re normally pretty accurate. They had us at seven points today so not far off. They won’t predict us to win (at the RDS), that’s the bottom line.

“Are we capable of winning down there? One hundred per cent. What it means is we have to be absolutely on the money, which is better than we were this week. But we knew that anyway. That’s exciting.”

A primary injury concern is Jacob Stockdale who limped out of the Munster game five minutes from time but McFarland explained in the immediate aftermath: “(I) honestly don’t know but I don’t think it is too bad.”

Leinster head coach Leo Cullen has a few more concerns arising from the weekend’s fare, spearheaded by Johnny Sexton. The Ireland captain took an early bang and, despite playing on for a little while, failed a Head Injury Assessment (HIA) and was replaced on 23 minutes.

It was only his second appearance of the season in a Leinster jersey, the previous one against the Dragons last October when he was forced off after 24 minutes. He’s been ridiculously unlucky. Cullen said of the post-match injury profile. “Johnny (Sexton) and Scott (Penny) are two HIAs so they will follow the graduated return to play (while) Jimmy O’Brien and Rory O’Loughlin are two shoulders (injuries) so they are the main four in the group.”

He continued: “This result and performance I think will focus minds for us, but we need to have a decent week’s training. Our guys need to understand the challenge that is there. Everyone wants to come here and beat Leinster, so we need to make sure we understand that.”

Munster enjoy an eight-point advantage over Connacht having played eight matches apiece and the challenge for Andy Friend’s squad is to back up their superb victory at the RDS.

“As we all believe anyway, at this moment in time, it’s gonna be the top of Conference A and Conference B (that will play in the final). We still want to be that (top) team and (the win over Leinster) puts us in a good position for that.

“The most important thing and Quinn Roux, our skipper, said it, is that we back it up now. We’ve got to turn up and do that again. That’s got to be hopefully what we deliver every time. We know we won’t, because we’re human beings, but that’s what we want to deliver and when we do get that energy and that accuracy you can see what happens.”

Connacht had a number of players ruled out at the weekend directly and indirectly because of coronavirus issues so may have more options personnel-wise next Saturday. Munster certainly will. Johann van Graan retained just Shane Daly from the team that started the Champions Cup win in Clermont for the game against Ulster and is likely to bring back several internationals for the trip to Galway.

While disappointed with the defeat in Belfast he said: “I felt the longer the game went the more we grew into it. We were over the goal line a few times with a minute or two to spare and we believed we could sneak a win there right at the end. Fair play to Ulster, they started the game better than us but I felt we finished it better than them and (it was) a fair result.”