John O'Sullivan at the Liberty stadium 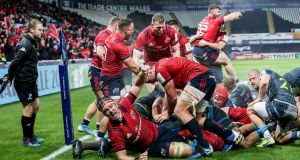 No one would accuse Munster of not having a sense of theatre following Saturday night’s four-try, bonus-point victory in Swansea. With the clock in the red at the end of the match, Tyler Bleyendaal fired a penalty to the corner; the upshot following some lovely sleight of hand in changing the fulcrum of the forward thrust was a try for replacement prop James Cronin. It’ll make the journey home all the sweeter.

It was nothing more than Johann van Graan’s side deserved based purely on their dominance, it’s just that it looked like remaining tantalising out of reach as the clock ticked towards the witching hour. The bonus point appeared comfortably within their ambit, once they had shrugged off the ring-rust of the opening quarter of this Heineken Champions Cup match.

There was always going to be initial issues with cohesion in attacking patterns based on the repatriation of the Ireland squad members. A primary frustration will be that it took them a little longer than they might have anticipated. Munster ironed out more and more kinks as the game unfolded once clarity was brought to the breakdown and offenders penalised rigorously.

The Ospreys have endured a rough season to date, one win in six matches in the Pro 14, riddled by injury and missing the majority of their marquee players. Last time out they allowed the Southern Kings a first ever away win in the league. Missing two thirds of what would approximate to a first-choice team for the opening European fixture, they may have feared the worst and those misgivings materialised on a long night for the home side.

The aesthetics of the victory won’t matter a jot in the aftermath. The five-point return from an away match supersedes the other considerations, at least for a day or two. Munster’s win was embellished by graft – no one worked harder than CJ Stander – and some super individual performances led by man of the match Jeremy Loughman, Tommy O’Donnell, Billy Holland, Peter O’Mahony Chris Farrell and Bleyendaal in particular.

Andrew Conway dazzled under the Liberty stadium lights, by some distance the class act in terms of creativity. Conor Murray kept his pack – they all contributed and in particular the frontrow – going in the right direction. More polish will be required to beat Racing 92 next weekend but that’s for another day.

The plaintive cries of the home supporters, exasperation initially and then anger, articulated a frustration. In contrast the travelling Munster supporters effectively turned this into a home game outnumbering their hosts tenfold.

Referee Karl Dickson largely let the first few scrums go without making a decision as to which frontrow was not driving straight or standing up under pressure. He wasn’t particularly keen on getting the tackler to roll away, all of which ensured a staccato pace to the game. It suited the home side as the game lacked shape.

When forwards’ sallies failed to deliver the line-breaks Munster were looking for, they occasionally opted to dink the ball diagonally over the top of the onrushing Ospreys defence, but the first few efforts were overcooked. The visitors opted for blunt-force trauma in trying to make metres but the Ospreys coped reasonably comfortably.

There was a substantial element in Munster’s patterns of trying to wear down the Ospreys, something that bore fruition later in the half. However, the visitors then conceded three penalties in quick succession, the last of which prompted Dickson to have a word with Munster captain, O’Mahony, based on an accumulation of offences.

Ospreys’ outhalf Luke Price landed his second penalty to tie up the scores at 6-6 after 28 minutes, his Munster counterpart Bleyendaal having earlier been successful with a couple of opportunities.

Munster’s best passage of play came just after the half hour, O’Donnell cutting a great line in midfield after another muscular Loughman carry and suddenly the visitors recycling went up several notches in speed. Stander was excellent in eking out metres on three occasions as the Irish province made inroads further into the home side’s 22.

Ospreys survived initially, but after conceding a penalty, Conway’s footwork got him to within a couple of metres from the line from a quick tap penalty. And when Munster had softened up the home defence, Loughman burrowed over from close range. Television match official Stuart Terheege had a quick look for a knock-on at the base of a ruck but adjudicated that there wasn’t one.

Bleyendaal posted the conversion and Munster had escaped to 13-6 on the scoreboard; they certainly weren’t flattered by the margin. A lingering frustration was that the Ospreys were allowed to slow down ruck ball, often illegally. Two statistics, 78 per cent territory and 73 per cent possession underlined Munster’s dominance in the opening 40 minutes.

The Ospreys were creatively bereft on the rare occasions they did have the ball, kicking possession away or flinging passes, several of which hit the turf. Dickson turned over a new leaf early in the second half, penalising Munster for not rolling away and then driving in at a scrum. The Ospreys then got pinged at a ruck and the game threatened to breathe as quick ball was now a possibility at rucks.

Munster benfited almost immediately, scoring two quick-fire tries, the first following a gorgeous lineout move round that front involving the outstanding O’Donnell. Then when play was switched to the other touchline Keith Earls satisfied the TMO that he kept his feet away from the touchline when sliding over in the corner.

Ospreys brought on four replacements that barely had time to warm their hands, before the visitors pounced again. Scott Otten lost the ball in contact and two quick passes later, Conway accelerated down the touchline on a 50-metre gallop, crossing unopposed. Bleyendaal added a fine conversion and at 25-6 the only question left to be answered was if Munster could secure the four-try bonus point.

They did, at the death through Cronin, in typically Munster fashion; cussed to the end and fully meriting their post-match serenade from the terraces.

1 Rory McIlroy puts integrity ahead of glory in US PGA second round
2 Buttler and Woakes drag England from the brink to set up thrilling Pakistan win
3 Frustration for Lowry and McIlroy as Li leads at US PGA
4 From Maestro to Mister: Andrea Pirlo named new Juventus boss
5 Sene Naoupu turning mind back to rugby after health scare
Real news has value SUBSCRIBE