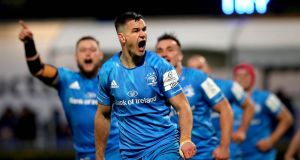 Always track your pass. These words will ring around Leinster mini rugby paddocks on Sunday morning as Johnny Sexton’s bonus-point clinching try showed the value of the most basic work ethic.

The second half was three minutes young when Sexton escaped the clutches of four weak tackles before sending the red capped Josh van der Flier storming into Benetton’s 22. When the Irish flanker was slowed, Sexton appeared on his shoulder to sprint under the posts, punch the winter sky and roar into the crowd.

You would never know he had some pent-up frustration to vent.

On this evidence, Ireland’s misery will be harnessed into more Leinster trophies. That was the long and short of it. The returning internationals looked ravenous to atone in blue for something they can never ever change.

But that’s not the only story as the former champions return to Champions Cup action. The most encouraging sight was Rónan Kelleher living up to the hype.

Also, rumours of Devin Toner’s demise have been greatly exaggerated.

The key figure in set-piece play for 99.9 per cent of the Joe Schmidt decade was a torn in the Italian lineout. The long fellow produced a solid 80-minute shift.

This 15,080 crowd coupled with a decent showing in Limerick last week indicates a desire for Irish rugby supporters to follow their teams in the flesh rather than watching the endeavours of Garry Ringrose and James Ryan over breakfast.

Unofficial and official inquiries about Japan 2019 will continue but what-went-wrong and who-did-or-didn’t-do-what questions will continue until adequate answers are offered up from within the Ireland camp, but the players certainly appear to have turned the page.

Not that they have a choice.

Still, Ringrose and Ryan – two of the few standout Irish performers at the World Cup – picked up where they left off.

The 24-year-old midfielder bagged two tries in the opening 14 minutes and after completing his hat-trick late on he flung the ball into the same section that had delighted in Sexton’s roar.

His first score was a traditional outside centre effort after a swerving run initially cracked open the Benetton defence. Sexton missed the touchline conversion.

Dean Budd dragged the visitors back into the contest with a muscular try in the faces of Ryan and Andrew Porter – no small feat – while Ian Keatley’s conversion put the visitors ahead after eight minutes.

Benetton came to play, with some clear coaching techniques from Kieran Crowley on view. They attacked the Leinster maul with some success.

They also went after Sexton. The veteran outhalf appeared to milk a late hit by Nasi Manu but it was the third time he had been dunted off the ball. Referee Pierre Brousset gave the Tongan a formal warning which appeared to contribute to a yellow card for Nicola Quaglio on 27 minutes when the prop high-tackled Kelleher.

That led to the third Leinster try being finished off by a nonchalant show and go from the young hooker.

Benetton were unlucky to lose both props in quick succession as Marco Riccioni appeared to be forced into a concussion test by the independent match doctor.

Leinster also lost a body to the Head Injury Assessment as Caelan Doris did not return following contact with Manu’s hip bone. Not the way the number eight planned his first European start. As is the way in Leinster, Max Deegan grabbed his opportunity with both hands.

Keatley missed a long-range penalty to decrease the Leinster lead but the Dubliner cleverly got away with blocking Jordan Larmour as the fullback threatened to finish off one of those spectacular breaks up field, which was created by Sexton.

Leinster head over to Lyon next week in decent shape.