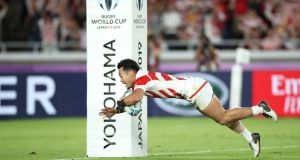 By half-time in Yokohama you couldn’t but rethink your choice of couch attire for what was the final game in Pool A, possibly even deciding to swap your kilt for a kimono and doff your tam-o’-shanter in the direction of Japan. It might have been against the national interest, given those New Zealand-avoiding permutations, but when a feast of that quality is served up by the hosts – and we’re talking three Michelin stars here – all you could do was gorge yourself on it and worry about the All Blacks another day.

Quite a few of the games in this World Cup have, to be honest about it, been as exhilarating as Ireland’s tussle with Georgia on Saturday afternoon, a contest that left George Hamilton noting when Alan Browne was warming up to come on that he’d enter the fray “the next time the ball goes dead . . . and the way this game has been going, you’d imagine the ball is losing the will to live”.

Never mind the ball, by then Ronnie Whelan had come close enough to penning his own obituary, so demoralised was he by the spectacle. The only time, quite literally, that he could find any hope in his heart was in the 76th minute when he spotted more activity on the touchline. “AARON CONNOLLY’S GETTING HIS TOP OFF!” Aaron being Ireland’s (potential) Kotaro Matsushima, in whom we have unreasonably invested all our hope, like he’s the love-child of Andy Reid and Wes Hoolahan.

It was just a pity that Ronnie wasn’t in the commentary box for Japan v Scotland game, it would have reassured him that ball sports can be a very lovely thing, Japan’s second try in particular, which was worth 10 bonus points alone, almost as beautiful as Ronnie’s shinner against the USSR back in the day.

We lost count of the number of flicky passes (“Offloads” – Rugby Dept) in the build-up to the try, but they brought to mind that first time seeing Gareth Edwards’ Baa Baas try on YouTube, which was almost as mesmerising as JPR Williams’ sideburns.

The flicky pass for the first try wasn’t bad either – “a worldy”, as ITV’s Jim Hamilton described it – and by full-time Craig Doyle was left close enough to speechless. Ian McGeechan stepped in to save him by chatting about the need for Japan to be invited to play in the Six Nations. Scotland might well re-lawyer up to prevent such an eventuality, after yesterday they’ll have concluded that playing Japan once, at most, every four years is more than plenty, thanks very much.

Ireland might well feel the same, although perhaps we should now reflect more positively on that defeat, concluding that only losing by seven points to Japan was up there with Joe Schmidt’s finest achievements?

Any way, now we know, New Zealand it will be. And Jamie Heaslip will be there, having abandoned his RTÉ punditry duties and headed east.

Before he departed, he turned up on The Late Late Show to plug his new book, in which he explains the extraordinary lengths he went to during his career to get the very best out of his body. Hypobaric chambers, compression socks, the works. “Squeeze the lemon and get every last drop out of it,” he said. And altitude tents. He even wrapped one around his and his wife’s bed. “God love her, she had enough of it after a week and shipped me off in to another room.” As grounds for annulment go . . .

Most impressively, Jamie got his DNA “sequenced”, in an effort to see “what different mutations I had and how I could supplement against them”. What did he learn? “It came back saying I wasn’t too far removed from a Neanderthal – I didn’t really know how to take that, to be honest.”

Ryan Tubridy wondered if being genetically likened to an extinct species of human, with a receding forehead and prominent brow ridges, that hung out in ice-age Europe around 100,000 years ago and is now a byword for an uncivilised, unintelligent, or uncouth man, was a good thing.

That Jamie wasn’t sure said something of his devotion to his sport. And that’s what we need next Saturday, prominent brow ridges Neanderthally and defiantly wrinkling. And that’ll be just for the Haka.