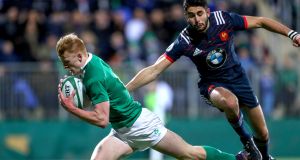 There is a striking symmetry to the composition of both teams, each retaining two starters and two replacements from last season’s Under-20 Six Nations Championship clash at Donnybrook, a game Ireland won. The visiting side does contain six players with previous experience of this level.

Irish captain and centre Tommy O’Brien and scrumhalf Johnny Stewart are joined by Ronan Kelleher, who moves from the replacements to the number two jersey, while Sean Masterson, who was on the bench last year reprises that role.

France have outhalf Romain N’tamack, a son of former senior international Emile, and centre Pierre-Louis Barassi are in the starting team again, while secondrow Killian Geraci and flanker Cameron Woki swap the bench in Dublin for a place in the team in Bordeaux.

Woki, another product of the remarkable youth system at Massey, has played French Top 14 this season for Bordeaux-Begles as has scrumhalf Arthur Colville at Stade Francais. The French team also includes Daniel Brennan, the 19-year-old son of former Ireland international, Trevor.

The Ireland team under new coach Noel McNamara – Leinster’s Stuart Lancaster presided over a training session earlier in the week at the coach’s behest – played a couple of warm-up games against Leinster and Munster Development XVs.

Angus Curtis, a son of former Ireland international centre David, has been beaten to the outhalf role by Harry Byrne, younger brother of Leinster pivot, Ross.

In the last five meetings between the countries this fixture has been won by the home team – a sequence that the bookmakers expect to continue as they make the French 12-point favourites. This is a youngish Irish side and the quality of the performance rather than simply the result will be the more relevant yardstick.