Joe Schmidt and Keith Earls speak to the press at the Irish Rugby Squad training centre in Carton House ahead of Saturday’s Six Nations opener against France. Video: Bryan O’Brien 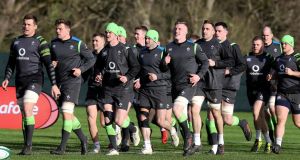 Ireland players during training at Carton House ahead of their opening Six Nations clash with France. Photograph: Tommy Dickson/Inpho

James Ryan has been named in the Ireland team to take on France in the opening Six Nations Championship at the Stade de France on Saturday (4.45pm, Irish time).

The 21-year-old Leinster secondrow will win his fifth cap in Paris having made his debut during Ireland’s summer tour last season. He came on as a replacement against South Africa during the November test series and started the final match against Argentina, lasting 49-minutes before being replaced by Devin Toner.

He will partner Iain Henderson in the secondrow with Toner once again among the replacements. Ryan, a former Ireland Under-20 captain, made his Irish debut before playing a first senior game for Leinster. He is joined in the starting team by his provincial team-mate Josh van der Flier, who has held off the challenge of Dan Leavy and Jordi Murphy to win the number seven jersey.

Leavy is included in the replacements as is scrumhalf Luke McGrath, who won his tussle with Connacht's Kieran Marmion to fulfil the role as back-up to Conor Murray. Fergus McFadden’s versatility and excellent current form has seen him included on the bench.