Larmour gets nod ahead of Rob Kearney for Leinster opener

Johnny Sexton returns to captain side against Benetton at the RDS 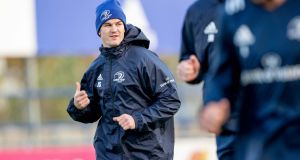 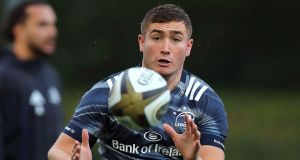 Jordan Larmour will start at fulback in Leinster’s Heineken Champions Cup opener at the RDS on Saturday. Photograph: Ryan Byrne/Inpho

In what may be a sign of things to come, Jordan Larmour has been named at fullback ahead of Rob Kearney in the Leinster team to face Benetton for Saturday’s Champions Cup opener at the RDS.

“Rob came off the bench last week,” said Leinster coach Leo Cullen. “With him and Jordan we would have chopped and changed them a bit last season. We look at the team we are playing against so Jordan gets the nod this week. Rob is not a million miles away.”

Ireland’s starting tighthead prop Tadhg Furlong has a “slight issue with his back” since returning from the World Cup in Japan so the in-form Andrew Porter will start in the number three jersey.

“It’s nothing major with Tadhg but I thought Ports did very well for us since he has come back in.”

Porter was used as both a loose and tighthead prop by Ireland this year and Cullen has not ruled out a similar role in a blue jersey.

“He is comfortable playing both sides, which is a very hard thing to do. In three, five years time who knows but this weekend he is a tighthead. It is an amazing skill to have, covering both sides of the scrum. He brings real energy to the team.”

Wallaby international Joe Tomane is retained at inside centre despite the return to fitness of Robbie Henshaw.

“Robbie pulled out on the day of the game in Galway [last Saturday] and he was still feeling unwell over the weekend so he didn’t train at the start of the week,” Cullen explained. “But he is good to go now.

“Joe is getting better all the time.”

Interestingly, Devin Toner is partnering James Ryan in the secondrow with Leinster’s other Australian, Scott Fardy, providing bench cover behind the Ireland duo. Caelan Doris is preferred over Max Deegan at number eight.

Having been returned to the starting line-up quicker than expected, Johnny Sexton will captain the team.

“I always look at setbacks the same way,” said Sexton. “Sometimes they come around when you least expect them. It’s just another chance to bounce back. I have so many over a long career that I am used to them.”

At this point an alarm went off in the Leinster media room that curtailed the live recording section. It was a false alarm.