Watch us lose the run of ourselves after beating All Blacks 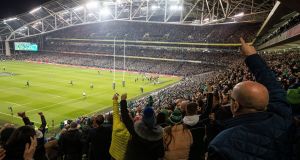 Celebrations at the Aviva. But we are not a people who do well with being told we’re the best in the world at anything. We all know this to be true. Photograph: Bryan Keane/Inpho

It will have occurred to many who take this newspaper of a morning that Saturday night’s stirring victory over New Zealand was, by all the usual measures, a splendid thing.

Well, at the risk of being condemned to the usual Irish Times punishment – beaten about the rump with sockfuls of oranges by Thornley, Cummiskey and Code Red Toland – this column is here to tell you all that you are wrong. That our history of behaviour when it comes to the having of nice things bodes not one bit well. No good will come of this.

It was also just a terrible thing to have happened to us, the overexcited, under-prepared plain people of Ireland. We’re not fit for it. We’re not made for it.

We would all have been far better off had the All Blacks poxed their way in for a try in that last attack and hit us with a stake-through-the-heart draw. That’s the sort of thing we’re used to. That, we could handle.

We are not a people who do well with being told we’re the best in the world at anything. We all know this to be true.

We’re grand with the striving to get better, fairly comfortable in fact with the jargony go-getting and so on. That’s all aspirational stuff and we can aspire with the best of them. Never forget that the first plans for Metro North were being drawn up in 2001.

So the idea of being the best in the world, sure. But actually being the best? And more or less accepted as such by all-comers in all corners? Well, that’s not really us. All we know for certain, here and now, is that we’re going to make an unmerciful balls of it. Nothing surer.

Fans of The Hitchhikers Guide To The Galaxy will be familiar with the Total Perspective Vortex, the most evil and effective torture device ever conceived on the planet Frogstar B.

Anyone who walked into the chamber of the TPV was shown a model of the whole universe and everything in it, together with a microscopic dot on a microscopic dot bearing the legend You Are Here. The devastating sense of perspective they got immediately crushed their soul and destroyed their mind, so starkly was it brought home just how truly insignificant they were.

It has always struck me as pretty unlikely that an Irish writer would peddle such a conceit. It works for the Brits all right.

It’s not hard to imagine Douglas Adams would be having a whale of a time with Brexit were he still with us – a Total Perspective Vortex would be just the job for Jacob Rees-Mogg and the lads. But Paddy in a TPV would be far more likely to shrug and go about his day. A dot on a dot on a dot? Sounds about right, in all fairness.

There’s only one problem. Notions. We’re great with the humility and the ah-sure-look of it all, right up until our noses twitch at the whiff of imminent success. Notions are the curdling agent in any Irish good news story, never more obviously than when it’s a sporting good news story.

Beating the All Blacks is a notions bonanza. Not for the team itself and obviously not for the coach – Joe Schmidt wouldn’t know a notion if it played a wraparound pass to Johnny Sexton. No, this is about us, the giddy fools who are talking seriously about a World Cup for a country who has never won a knockout tournament match outside the pool stages.

Watch us now as we dive headlong as a race into a Zero Perspective Vortex. Between now and the World Cup there’ll be maybe a month of careful chat about not counting our chickens before it defaults, most likely from the Christmas awards season onwards, into unadulterated poultry maths.

Notions, notions. Don’t even try to pretend that this isn’t who we are as a people. History has shown we are not impressive folk when we bounce into a situation where we are anointed the world’s best anything.

We had Riverdance and foisted it to the planet in the shape of Michael Flatley. U2 couldn’t abide just being the biggest band in the world, Bono had to go full Bono off the back of it, forever and ever, amen.

We always go too far. We couldn’t simply enjoy being the first Irish generation to broadly all have a few quid back in the 2000s. We had to do the dog on it and go off pretending to be experts on the Bulgarian apartment market into the bargain. Notions.

A photo did the rounds on Twitter last week of a page from a Mayo match programme in 2006 featuring side-by-side headshots of Willie Joe Padden and Rui Costa. Yep, that Rui Costa, of AC Milan and Portugal.

Some local property genius had dragooned the pair of them into, well, it’s not especially clear what their role was. But the tagline –“Providing you with winning overseas property solutions!” – appeared alongside a picture of a beach in the Algarve and some old buildings in Budapest. Peak notions.

This. This is who we are.

Even hurling, so innocent and pure and brilliant and ours, is riddled with notions. It isn’t enough for hurling snobs to contend that their game beats all others, they have to insist on it being played one particular way and woe betide anyone who tries to colour outside the usual tactical lines.

And what are these annual jollies to Fenway Park and Sydney about if they aren’t notions in their most craven, grasping form?

This is what we do.

We can’t help ourselves when it comes to taking something good and rack-stretching it till it screams for mercy. We will make a holy show of ourselves with this between now and the World Cup.

Watch as the thunder gathers and the lightning starts to sparkle and the truth-tellers begin to raise themselves up to their full height as 2019 progresses.

“Why not us?” they will ask in their mock-innocence. By the time we get to Japan, it will only be a matter of collecting the trophy.

Yes, the All Blacks have done us grievous harm here by not putting us back in our box when they – and we – had the chance. They’ll go away and lick their wounds, we’ll stay here and lick ourselves.

We’re not able for this. No point kidding ourselves otherwise.