The Offload: Stockdale must grasp the crown with both hands 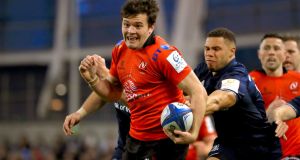 Stockdale must grasp the crown with both hands

“People will tell you what you thought, what you felt and paint you in an untrue light,” tweeted Burns, the journeyman outhalf, lumping Stockdale’s costly fumble alongside his pre-try celebration earlier this season for Bath against Toulouse that allowed Maxime Medard to unburden him of the ball (so not the same at all). “All you can do is bounce back, prove them wrong and do it with a smile on your face. I’ve been there. . .”

Actually, “all you can do” is hold the ball in two hands, dive before the try line and only celebrate after the whistle. Still, the 22-year-old has nothing to learn from the mistake that denied Ulster a nine point lead and clear passage to the Champions Cup semi-final because he has been warned - presumably countless times - about his flawed technique. Former Ireland Under-20s coach Nigel Carolan previously mentioned the “heart failure” watching Stockdale’s perilous extra-strides in the dead ball area.

“Howler,” went Shane Horgan, “that cost Ulster the game. It will stay with him a long time.” “You’ve got to dive,” stated O’Driscoll nodding towards Keith Earls’ two handed finish in Edinburgh when the Munster winger began his descent three metres from the line.

Ulster coach Dan McFarland makes a valid point: “We’re not even close if Jacob’s not playing.”

Equally, Garry Ringrose has nothing to learn despite two charge downs, one gifting Kieran Treadwell an early try. What makes Stockdale and Ringrose so special is they appear immune to pressure.

Stockdale will never drop to Freddie Burns’ level, nor be as humble as Earls, but becoming the greatest winger on planet Earth remains a realistic target in 2019. Take the crown with both hands.

The secret to a brief tenure as an under-study is to make the audience forget the star actor’s absence because they only see the character. In this case the Aviva Stadium only witnessed a fully formed outhalf produce steel-nerved heroics.

Ross Byrne charged into contact. Ross Byrne yelled for the ball to squeeze past Robert Baloucoune for a try. Ross Byrne ignored the agony of cramp to tell Rhys Ruddock that his penalty goal would travel over the black spot and so settle this Champions Cup quarter-final.

Ross Byrne looked awfully like the man who wasn’t there. The same player was discarded during the Six Nations as Munster starter Joey Carbery was cemented as Johnny Sexton’s back up until hamstrung. Then Jack Carty’s fluid performances for Connacht were rewarded with international exposure in Rome and Cardiff.

Maybe Byrne should have joined Ulster last summer. Neither he nor Carbery took that career advice, and now Byrne is the man keeping the champions’ European campaign afloat. He still needs injury to others to make the World Cup squad but with Carbery and Sexton both rehabbing muscle problems that, increasingly, looks a possibility.

His inclusion would ensure the art of kick passing gets promoted to an Irish specialty in Japan. After Saturday’s showing such a scenario feels less like doomsday.

27 tackles by James Ryan to go with his 21 carries, by far the best numbers in a game packed full of astonishing performances.

“We’re not even close if Jacob’s not playing. Whatever you say I’m not going to say that Jacob is the person who cost us.” - Dan McFarland on Jacob Stockdale.

Beware the constant snakes and ladders for those scraping to make Ireland’s 31-man World Cup panel.

John Cooney’s credit rating surely improved as he guided Ulster agonisingly close to the semi-final with Luke McGrath needing a big season’s end to shift him or Kieran Marmion from the reserve scrumhalf slots. Ross Byrne can do little more although Cooney may well travel as the third choice outhalf (or Joey Carbery will cover scrumhalf).

Rob Kearney’s importance was emphasised by flaws in Jordan Larmour’s display at fullback. Jack Conan appears to have thrust himself towards the starting number eight slot with a stunning ball carrying display.