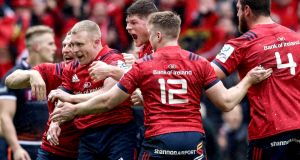 The result tends to initially shape the contours of reflection, softening the edges, so it was unsurprising that the overwhelming emotion following Munster’s Champions Cup victory was quiet satisfaction, broken down further to a relief tinged with pride.

Johann van Graan’s side demonstrated the essence of Munster rugby genealogy, a squad imbued with the spirit and cussedness to stare down adversity and refuse the blink first. Defence won them this match, that goal-line defiance, particularly in the first half; that and the whip-smart thinking and finishing prowess of Keith Earls: two chances, two tries and two massive moments in the context of the game.

The initial setbacks on the day were hardly trifling, fullback Mike Haley’s late withdrawal prior to the game, Joey Carbery’s hamstring injury and losing the impressive Jack O’Donoghue following a failed head injury assessment but pivotal to coping successfully were the individual performances of Darren Sweetnam, Tyler Bleyendaal and Arno Botha.

Sweetnam was superb aerially, Bleyendaal’s sharpness to snaffle an overthrown lineout ahead of Earls’s second try and the subsequent touchline conversion and Botha’s intervention in defence, twice, late on were pivotal to the outcome. The blows proved to be only glancing ones.

Van Graan acknowledged: “If you just think about losing Mike Haley, a yellow card to your lock [Tadhg Beirne on 10 minutes], then you lose your openside [O’Donoghue] that has just come back and then you lose your starting 10. Mentally that is massive to come through, and I’m really happy that our guys did.

“It points to very good planning, very good research, but it’s up to the players to solve issues on the field. I thought we solved a lot of issues and once we got in front we were difficult to beat. We knew that we had to dig in deep and it wasn’t going to be pretty.”

Munster struggled horribly at times, rarely found an attacking rhythm, probably overindulged in the kicking game, conceded 10 penalties and yet when trailing 13-10 and with the home side in the ascendant, as the game wound down, they were handed one final opportunity, when Edinburgh loosehead Pierre Schoeman made contact with Beirne and it was spotted by the television match official Eric Gauzins.

There was some confusion as to whether Edinburgh had a scrum or penalty advantage at the time – it was the latter – but what is irrefutable is that momentum flipped in an instant when the visitors were awarded a penalty. Contact was perfunctory, although that wouldn’t have seemed the case in gauging the reaction of the prone player in real time.

Edinburgh coach Richard Cockerill refused to blame his South African prop but there was no denying how pivotal the moment was to the result. “It’s a bit of discipline from Pierre Schoeman at the end and you’re kicking a goal; you’re six points up and you win the game. That’s life. I’m not going to criticise Pierre, because he’s a committed fellow and he does what he does and I’ll back him to the hilt.

“But those are the falls sometimes. They’re a good team and they find a way to win and we’ve got to do the same. There are tiny, tiny margins [in determining the result], even for their first try I thought their player [Earls] knocked it on. It’s tiny margins in officiating. I’m very proud of how we performed: Munster are a great team and we’re now able to compete at that level.”

It was a curious game, enthralling but lacking fluidity and continuity given the frequency with which each team turned over possession, supplemented by a heaped spoonful of indiscipline. Munster and Edinburgh presented a mirror image to one another in terms of attacking patterns, starter-plays that came from 15-20 metre, contestable box-kicks.

It was prescribed and predictable for the most part but thanks to the efforts of Munster’s back three, Andrew Conway, Earls and Sweetnam, the visitors came out on top in the majority of aerial duels.

Edinburgh quickened the tempo as they progressed up the field only to slow it down and get rather narrow when trying to lumber over inside the five-metre range by huffing and puffing around the fringes. They did possess though two of the game’s most captivating ball-carriers in the twinkle-toed Darcy Graham and the power-train, Fijian number eight, Viliame Mata.

Three times they turned down kickable penalties in the first half in favour or going to the corner while Munster also doubled down in this regard after the interval and they took came up empty-handed, first kicking a penalty to touch and then choosing to scrum from a second one.

The visitors’ muscular and at times heroic goal-line defence in the early stages of the contest kept their line, even when a man down – the otherwise excellent Beirne received a yellow card on 10minutes – while the work of the starting backrow and centres Niall Scannell and Chris Farrell at the breakdown was impressive.

Munster scored against the run of play. Conor Murray’s contestable box-kick forced a knock-on from Duhan van der Merwe. From a five-metre scrum, Edinburgh scrumhalf Henry Pyrgos illegally slapped the ball loose. Earls took a quick tap from the penalty and jinked over beautifully. Carbery produced the perfect response to the jeering by landing the conversion.

By half-time Edinburgh had edged into a 10-7 lead with a try from Chris Dean, converted by Jaco van der Walt, with the outhalf also kicking a conversion. Bleyendaal and van der Walt exchanged penalties after the re-start, Munster less loosey-goosey in kicking away possession.

Conway made a brilliant try-saving tackle on Damien Hoyland, the Edinburgh pack responded by winning a massive scrum penalty near their own line. Munster’s redemption came on the day came in unlikely circumstances but their tournament journey treads a familiar pathway: 14 wins in 18 quarter-finals, three semi-finals in succession and a date in Coventry with Saracens in three weeks’ time.