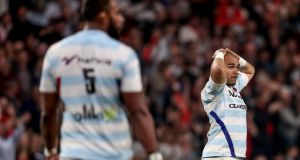 Toulouse, reduced to 14 men midway through the opening half, bravely held off hosts Racing 92 to win 22-21 in an all-French thriller on Sunday and qualify for the Champions Cup semi-finals.

Last year’s runners-up Racing had the last possession after Camille Chat’s late try had put them within one point of the four-time champions, but Toulouse managed to steal the ball and hold it until time ran down.

“It was a huge blow but we kept our composure. We defended during the whole second half, we stuck together,” said Toulouse scrumhalf Antoine Dupont, who scored two tries.

Toulouse had another try through Maxime Medard as Zach Holmes, who picked up a red card in the 23rd minute, and Romain Ntamack slotted a conversion each with Thomas Ramos adding a penalty.

Racing, with the best attack in the Top 14, scored two tries through Teddy Thomas and Chat’s late effort with their other points coming from the boot of Maxime Machenaud.

Top 14 leaders Toulouse will travel to defending champions Leinster, who survived a scare in a 21-18 win against Ulster on Saturday.

At the Paris La Defense Arena, Holmes was sent off for a high tackle on Juan Imhoff, leaving his side a man short.

Soon afterwards, however, Thomas was sin-binned and Toulouse took full advantage with both teams on equal terms for 10 minutes.

The visitors were 10-7 down after Racing answered Dupont’s early converted try with a Machenaud penalty and Thomas’s converted try.

But after Thomas was shown a yellow card for cynical play, Toulouse regained the lead when Medard touched down at the end of a brilliant collective move.

Dupont scored his second try just before halftime as Ntamack’s conversion put them 19-10 up.

Racing came breathing down their opponents’ necks with a couple of penalties, only for Ramos’s three-pointer to give the visitors a five-point lead with 12 minutes left.

Chat restored hope for the hosts, who played another 10 minutes with 14 men after Imhoff was sanctioned in the 66th, when he dived into the right corner even though Machenaud failed to convert.

They had a Leone Nakarawa try disallowed for an earlier fault on a lineout and Toulouse’s defence eventually helped the visitors rip the ball from the final possession and win a penalty as the clock turned red.