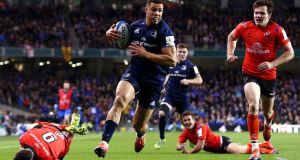 A thunderous Thrilla in the Aviva indeed. This was only the fifth all-Irish duel in the 24 years of the Heineken Champions Cup and it is no reflection on the other four to say that this was the most compelling by a distance.

It was relentless, exhausting stuff from first to last, and the ball seemed to be always in play. This was a game of Test match intensity, and to be honest, even better than many Test matches here in terms of atmosphere. The two sets of supporters roared themselves hoarse.

A young, remodelled Ulster were heroic, and went down with their boots on, taking the game irreverently to Leinster and leading for large chunks of a gripping encounter. With endless ebbs and flows, and turning points, Jacob Stockdale’s failure to touch down with Ulster leading 13-11 after leaving three men in his wake five minutes into the second half will be the stand out.

But who’s to say Leinster wouldn’t have found a way? That Leinster were somehow able to eventually subdue Ulster was in large part due to them having the superior bench and the savvy of champions, turning to their lineout maul for a cramping Ross Byrne to kick the 72nd-minute match-winning penalty and then running down the clock against an utterly exhausted Ulster.

It would have been some effort for Ulster to maintain their energy of the first 70 minutes or so. Their physicality rattled Leinster’s cage and rattled a few ribs with their sprinters’ starting-block pace off the line in defence. They offered only hard shoulders too, often times double tackling and particularly quick to identify the threat posed by the footwork of Garry Ringrose and Jordan Larmour.

Leinster’s response was to try and pass their way out of the flying men in red, sometimes with convoluted switch backs and tip passes back inside, although generally they were still being emptied.

The champions were at their most effective when generating quick ball through the phases from the big carriers, James Ryan, Rhys Ruddock and Jack Conan, who ultimately was deemed man of the match amid a host of contenders.

Buoyed by an early lead which was the direct product of their line speed in defence, Ulster also won the first-half aerial duel, the always dangerous Stockdale and Robert Baloucoune chasing down John Cooney’s pin-point box kicks, although Leinster improved after the break.

Cooney oozed confidence coming off the back of his first Six Nations, passing crisply and giving Billy Burns plenty of time on the ball. The Ulster halves were also helped by the ability of Iain Henderson, Marcel Coetzee, Stuart McCloskey and co to carry through the tackle and over the gain line.

The estimated 12-15,000 visiting Ulster supporters were in full voice from the off, all the more so after Henderson smashed Seán O’Brien in the tackle and McCloskey smashed through Cian Healy when Ulster won a turnover after Nick Timoney tackled Ross Byrne.

They were cheering to the rafters soon after. It came from Leinster pilfering Rory Best’s first throw, but when Ringrose jinked back inside looking for space and then opted to kick, Best charged down and Kieran Treadwell pounced for the try. Cooney converted.

Soon after Ulster lost Best to what seemed an injury to his left ankle. Leinster’s response was impressive to say the least, hammering through almost 30 phases off a lineout. Ringrose carried a couple of times like a man possessed, and Larmour threatened with his footwork wide left, but mostly it was unrelenting big carries off rapid-fire ball.

Ulster were flying up to make two- and three-man tackles, but eventually Ross Byrne called for ball to the blindside and ran into Baloucoune’s tackle to reach out for the line one-handed.

He missed the difficult conversion, and soon after a more kickable, straightish 40-metre shot after a huge hit by Baloucoune on Larmour, but Ulster had been too quick off the line.

Amid the constant din and the furious pace, Adam Byrne and Stockdale were having a mighty duel in the air, the latter getting even when reclaiming Cooney’s box kick. Coetzee charged through Tadhg Furlong’s tackle and when Healy came in from the side after the ruck had formed ill-advisedly, Cooney made it 10-5.

Henderson was equally ill-advised when clearly offside at the fringes after a nice spot move and Seán Cronin’s break from Ross Byrne’s inside pass, but when Leinster went to the corner Cronin overthrew. The Ulster fans cheered Burns’s clearance kick like it was a score.

They were cheering again when Michael Lowry danced in under the posts, but referee Romain Poite had long since stopped the game for Marty Moore knocking on in the tackle.

Ulster kept flying up off their defensive line. Darren Cave emptied Ringrose before he and McCloskey read a spot play and smashed Dave Kearney. But they were pushing things too much at the breakdown, and when Coetzee went off his feet, Ross Byrne nailed an important 40-metre penalty for him.

After Rory O’Loughlin forced a spillage from McCloskey, Ross Byrne used a penalty advantage off a huge Leinster scrum with his trademark cross-kick to the touchline-hugging Dave Kearney, who broke Lowry’s tackle but was hauled down just short.

Instead, another 40-metre penalty by the outhalf inched Leinster ahead for the first time, but not for long.

Ulster went through the phases with their big carriers off Lowry’s leaping take and return carry. Cooney sniped dangerously and after O’Brien had a second bite after Scott Fardy had done so at an Ulster ruck, Cooney kicked Ulster back in front.

The Ulster scrumhalf did afford Leinster one last multiple-phased attack off a lineout with the half’s last play when kicking out on the full. But it ended with McCloskey and Cave again combining in the tackle to force a knock-on, leaving it 13-11 to Ulster at the break.

With that the players and crowd alike took a deep breath. It had been a riotously helter-skelter first half.

Not that there was any let-up on the resumption. Ringrose again had his kick charged down, this time by Best’s replacement, Rob Herring, but the ball rolled over the dead ball line before Herring could reach it.

Then, after Cronin had his throw picked off, Stockdale lit up the game when seemingly conjuring a try out of nothing when Burns pulled the ball back on the blindside. Leaving Adam Byrne, Larmour and Ringrose in his wake, he opted to touch down one-handed when Dave Kearney made what seemed a vain covering tackle, and on review clearly lost control of the ball.

It seemed like a huge moment at the time, and so it proved.

It remained breathless stuff. In one exhausting exchange, Ulster’s line speed again forced a loose pass, this time from Noel Reid who had replaced Rory O’Loughlin, before O’Brien brilliant read and reclaimed a chip by Burns and was heavily involved in the ensuing phased attack.

Cooney, in the jackal, won a relieving penalty, whereupon O’Brien was replaced by Dan Leavy, but Leinster kept coming. The constant probing and recycling had to tell eventually, and it did when Conan picked and went through the guts of Ulster’s defence, beating Eric O’Sullivan, eluding Cooney, beating Lowry – all the while trying to hoist up his shorts – and then offloading when tackled by Stockdale for the supporting Adam Byrne to complete a good finish. The conversion made it 18-13.

But Ulster were far from done. Leinster produced two big, aggressive defensive sets of their own, the second ending when Furlong hoofed the ball downfield left-footed. They seemed to have completed a third too when two players ‘jackaled’ over an isolated Herring, but Poite pinged Fardy for going off his feet.

Alas, there was a lengthy delay before Leavy was stretchered off with what seemed like a bad leg injury.

Ulster went to the corner, and were handsomely, and remarkably, rewarded. Luke Marshall, on for Cave in his first game since last May after recovering from an ACL injury, floated what looked like a forward pass wide to Stockdale to stretch Leinster on their right flank with his first touch. Then, with his second, after McCloskey’s pull back to Burns had sucked in the Leinster defence, Marshall straightened past one tackle and into Ross Byrne to score.

Surprisingly, Cooney missed what for him would normally be a routine conversion. The scores were level.

Leinster resorted to their maul, twice rumbling forward outside the Ulster 22, and earned a penalty wide to the right. Ross Byrne, despite by then having started to cramp up in his left leg, nailed it before hobbling back to the halfway line in a final act of Herculean inner strength and focus. He was promptly replaced by Rob Kearney, with Reid shifting to outhalf.

James Tracey didn’t effect his strike at a Leinster scrum, and Ulster forced a turnover. With Cooney receiving treatment for cramp before rejoining the fray, Ulster kept knocking before Dave Kearney shot up to make a superb read and tackle to force a turnover.

Cue a painstaking, relentless, 44-phase of punishing recycling before Luke McGrath, though close to the Ulster posts, was more than happy and relieved to kick the ball dead.

The champions have rarely had to dig so deep, because Ulster took them there like few teams do, but they did.