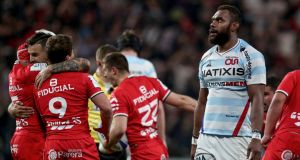 Racing’s Leone Nakarawa dejected after his side were defeated by 10-man Toulouse in the Champions Cup quarter-final at La Defense Arena, Paris. Photograph: Dan Sheridan/Inpho

It’s an indefinable quality, but pedigree sure counts in Europe’s premier competition. After the Heineken Champions Cup quarter-finals delivered as it does, and in spades, a third thriller over the weekend ended with 14-man Toulouse overcoming Racing 92 to ensure a semi-final meeting with fellow four-time champions Leinster at the Aviva Stadium three weeks hence on Easter Sunday.

The day beforehand, Saturday, April 20th, two-time winners Saracens will meet two-time winners Munster in Coventry’s Ricoh Arena. The semi-finals are once again the stage for European aristocracy. Leinster and Munster are back again for the third season running and, as was the case two seasons ago, are joined by Saracens.

Watching Toulouse recover from a red card for outhalf Zack Holmes in the 23rd minute in La Defense Arena yesterday, at which point they were unluckily trailing 10-7, to beat Racing 22-21, Leinster supporters would have been rooting for Toulouse. But while this meant a home semi-final instead of an Easter weekend in Paris in Racing’s indoor La Defense Arena for a repeat of last season’s final, Leinster are assuredly facing the superior team.

Toulouse have just forgotten how to lose.

Leinster and Toulouse will be renewing acquaintances for the 12th time, with the French club holding a 6-5 lead in their head-to-head record, and for the third time this season.

Leinster did respond to their 28-27 round-two defeat in Toulouse by beating them 29-13 at the RDS in January, but Toulouse have now won eight matches in a row since that defeat, which remains their only loss in their last 21 matches.

Toulouse are back, and how. This will be their first semi-final since 2011 when Leinster beat them in the Aviva Stadium 32-23. Toulouse brought less than 3,000 that day.

Hence in contrast to last Saturday, when an estimated 12,000-15,000 Ulster fans were in attendance, Leinster are liable to have 45,000-plus supporters for this semi-final.

Leinster went on to claim their second title in 2011 with that extraordinary comeback win over Northampton in Cardiff, Johnny Sexton scoring two tries in an extraordinary 28-point haul, and the expectation is that their outhalf and captain will have recovered from the tightness in his leg which forced him out of Saturday’s thrilling 21-18 win over Ulster at a feverish Aviva.

Robbie Henshaw also believes he is on course to return from his leg injury in the next week or two, although against that the desperately unfortunate Dan Leavy is likely to be sidelined for the rest of the season and perhaps the World Cup too due to a suspected dislocated knee.

“Dan has had a bad injury,” said Leinster head coach Leo Cullen. “I don’t want to get into too much detail. He’ll be out for a while. Him and Josh [van der Flier], it’s been a tough year for the two of them. That’s sometimes the nature of our game.”

Cullen also believes Leinster will be better for the gruelling examination provided to them by Ulster.

“Credit to Ulster, they gave everything that they had so they should be proud of their efforts, I think,” he added. “Ulster have had to fight through a number of really tight games this year. That makes them very dangerous because they’ve been in that situation and they know what to do, how to manage the game.

“We’re through to the next round. But – and it’s a big but – we’re pretty fortunate as well.”

Cullen admitted the mood within the squad was different than was the case when completing last season’s historic double, “and we just have to embrace that for what it is. The group is still very hungry to be successful for lots of different reasons. They want to do special things together. It’s a bit different to this time last year because it was ‘can we actually go and do it?’ and then you go and do it and then it’s like ‘well, that felt pretty good, let’s go try and do it again’.

“And then you get a game like this one where it’s so close to slipping away from you. That’s the feeling you need to remember. That’s what it’s like when you lose. You’re gone and it’s a pretty horrible sensation.”

No less than Leinster, Munster had to dig deep to come from behind and beat Edinburgh 17-13 at Murrayfield on Saturday thanks to the second of two sharply-taken tries by Keith Earls.

Johann van Graan accepted they would have to be “a lot better” three weeks hence but Munster lost an unwell Mike Haley before kick-off and then Joey Carbery (hamstring) Jack O’Donoghue (HIA) and Tadhg Beirne to a yellow card in the first half.

“Mentally that is massive to come through, and I’m really happy that our guys did,” said van Graan. “That points to very good planning, very good research, but it’s up to the players to solve issues on the field. I thought we solved a lot of issues and once we got in front we were difficult to beat.”

The Red Army could be accommodated at Coventry’s Ricoh Arena (capacity 32,609) in huge numbers again given Saracens are not a heavily supported club, with the clubs to send in their requested allocation today.

Munster lead Saracens in their head-to-head 4-3, but two seasons ago Saracens beat them 26-10 in the semi-finals at the Aviva en route to completing back-to-back titles. Despite losing Owen Farrell before their semi-final against Glasgow on Saturday when his wife Georgie Lyon went into labour, Saracens ominously ran in seven tries in their 56-27 win.

But this is a truly heavyweight line-up, and whoever emerges as champions on Saturday, May 11th, at St James’s Park in Newcastle, will have earned it.

If soul-searching was a sport, today’s GAA teams would all be champions 06:00
Matt Williams: The sky is not falling in on Irish rugby - but Ireland do need a new plan 06:00
Superfan John Murphy keen to keep streak going and make it 80 not out in Donegal 06:00
Miss Amulet looking to complete rags-to-riches success at Newmarket 06:00
Every yellow jersey winner must still feel guilty by some association 06:00
Crossword Get access to over 6,000 interactive crosswords