McFarland proud of Stockdale despite slip down the ladder 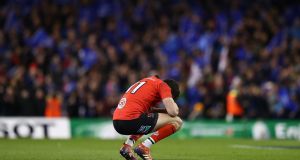 This game forever spins on an error by a 22-year-old well on track to becoming Ireland’s greatest winger. Jacob Stockdale remains the ultimate entertainer but the suggestion of show-boating following his flawed one-handed try-scoring technique was dismissed by Ulster coach Dan McFarland.

‘Two hands’ shouts every coach Stockdale has ever encountered or ‘dive on the ball’ – like you are shielding a bomb – is the simple method to avoid the fumble that denied Ulster an essential try in the 45th minute.

“I know what you want me to say,” McFarland began. “I am not going to say that. Downstairs I was asked the question four times: what about Jacob dropping the ball over the line? My answer to that is not many people in the world can beat that many players to even get in the position where they put the ball down.

“I’m proud of Jacob. He played a great game, did a lot of really good things, he’s disappointed but that’s not the reason we lost the game.”

These Ulster players heard what was being said about them. John Cooney, excellent besides a costly missed conversion and such a glaring absence when cramp took hold, spoke about it this week. The ex-Leinster scrumhalf was called a Connacht man when he moved to Galway but a “Dubliner” on heading north.

Each and every one of them had an axe to grind. Kieran Treadwell was capped on the same 2017 summer tour of New Jersey and Japan that introduced James Ryan to a wider audience. Treadwell went looking for Ryan at every opportunity – he did a decent impression of him – and the same goes for Darren Cave leathering Garry Ringrose’s rib cage or Jordi Murphy and Nick Timoney hunting Seán O’Brien and Rhys Ruddock at every turn.

Murphy joined Ulster last summer so he could play in his natural position. He filled the number seven jersey in a way O’Brien and the injury cursed Dan Leavy could not.

“It’s serious,” Cullen confirmed of the leg damage that saw Leavy depart on a motorised stretcher. “I don’t want to say much more than that.”

Timoney needed the Ulster Academy to become a professional rugby player when Leinster passed on him.

Cooney, Murphy and Timoney were not Dubliners on this day in the city they left to build now fully formed careers.

Such motivation can level up a contest very quickly. Everyone knew each other and nobody was better. Same bones to crack and blood to spill on the grass. You could hear the belts and forced exhales when red hand jerseys crashed into the blue champions.

Ulster made this into a tribal, fascinating game. Here was interprovincial rugby at its thrilling best.

Ringrose was exposed early when blocked down by the towering Iain Henderson as he sought an inch of space to kick from his 22. Treadwell calmly gathered and dived over.

Byrne initially struggled off the kicking tee but his boot sang by the end. He left five points on the field in the first half, but his trademark kick pass almost gifted Dave Kearney in for a try.

It was Cooney who actually controlled the tempo in those opening 40 minutes. He looked every inch the international halfback he has been unable to become, probing the blue line, dummying to streak into space and posting three unfussy kicks for a 13-11 Ulster lead.

Losing Rory Best to a gamy ankle on 15 minutes barely registered. Rob Herring is eight years the younger hooker and he muscled into the fray.

Ulster made this a fight. They tried to warn the Leinster crowd. If not for some silly indiscretions at the breakdown by Henderson and Marcell Coetzee, which offered Ross Byrne a handy six points, the lead would have been serious.

But it wasn’t and Leinster could creep back into the battle.

The entire second half had to be seen to be believed. Billy Burns kicked-off to Ringrose but as the centre opened his wings to find touch Herring arrived to block him again. The force of contact denied the hooker a famous try but Leinster were rattled.

Still, only a squad with Saracens, Racing 92 or Munster’s arsenal will end their European reign.

Leinster were blessed for the Stockdale try that will never be. For the first and probably last time in his life the winger fluffed what looked certain glory after bursting down the same patch of land where he destroyed the All Blacks. No control on grounding. No try.

“As a coach he gave us the odd heart failure when he was scoring,” said Carolan of a flawed technique.

“Jacob’s really, really disappointed,” McFarland continued. “Three millimetres off his finger. There were so many other small things that could of sent the game in other directions. Chaos theory will tell you it could have been any one thing. I am so proud he is in our team.”

The champions duly marched from their own territory.

Only four minutes into second half but the chance to go nine points clear disappeared. Leinster autopilot would erase the two-point deficit. Only a matter of time.

Seán Cronin broke the dam. Murphy made a recovery tackle but the blue wave came gushing through.

Ulster penalty! Cooney arched over Byrne to prompt the visiting thousands to wave their white flags as a sign they would never surrender.

O’Brien was replaced by Leavy as Ulster cleared their lines.

That nobody was taking a backward step was best seen under dropping ball. One time Stockdale and Adam Byrne landed in a tangle. Poite, who was happy to pocket his whistle as if he refereeing hurling championship in Thurles, was forced to intervene.

Stockdale was supposed to have created enough scope for a massive upset but, instead, on 53 minutes, Adam Byrne finished off a stunning break and offload by Conan.

Leinster, leading by five points, meant Ulster had to discover reserves they don’t yet possess. But there is plenty to the team McFarland is only beginning to shape. Cooney kept them moving forward. Henderson and Treadwell carried with abandon.

On the hour mark Cullen unloaded his forward bullets while Ulster players were visibly wilting. Murphy looked to be destroyed but it was a mirage. They kept showing up. Poite awarded a very controversial and very kickable penalty but Cooney had to wait until Leavy was carted off the field in terribe discomfort.

The Ulster leaders ignored three points and turned to the lineout. It paid off as Luke Marshall emerged from the shadow of a 10-month injury to score the try that should have screamed redemption.

When Poite finally awarded a difficult Leinster penalty, near the right touchline just outside the 22, Ross Byrne and Rhys Ruddock had a brief conversation.

Byrne’s standing leg had been cramping up and he winced in agony when retreating from a beautiful strike that made it 21-18. Rob Kearney replaced him as Noel Reid switched to outhalf with eight minutes left in this crazy affair.

“Relieved and frustrated,” Leo Cullen surmised as they await the winners of Toulouse and Racing (the former must come to Dublin, the latter semi-final would be in Paris) as Munster face Saracens in Coventry.

“Desperate disappointment,” was McFarland’s final thought. “We could have won that game.”

“The scoreline says everything. It’s like saying we deserved to win, we didn’t win.”

Confirmed: College Football Classic will not take place in Dublin in August 13:09
Southampton manager Ralph Hasenhuttl extends contract 12:58
Formula One confirms rescheduled European calendar 12:48
Gerry Thornley: Stoppage could tip balance in favour of big money teams 06:30
Increase in membership a plus for adapting golf clubs 06:00
Here is your handy guide to sport on television this week