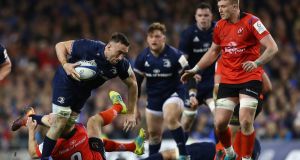 Leinster wade into the psychological quicksand Ireland have yet to escape. Largely the same personnel, the burden of favouritism has always weighed heavy on the collective psyche of Irish sporting heroes.

“It’s easier to hunt teams,” Jack Conan admitted after his phenomenal performance despite being stalked by Ulster’s former Leinster backrowers Jordi Murphy and Nick Timoney. “I think the success will be greater if everyone wants to beat us and we still come out on top.”

In short, the champions survived without looking like champions. When the opposing coach invokes the merits of “chaos theory” you know you’ve been dragged through the ringer.

An epic sporting contest, Ulster landed in Dublin with a unified desire to prove themselves equal to men they have always competed with for positions and contracts.

“I had that sense it was going to be one of those days on a knife edge,” admitted Leo Cullen after. “We were – is undercooked the right word? – we are just not quite there. We have time now before our two semi-finals.”

The semi-final against Toulouse provides Leinster with the opportunity to separate themselves from Ireland’s ongoing mental struggles.

Before England and their Saracens-heavy pack came to Dublin in February, some of the most respected voices in Irish rugby were preaching that everyone needs to embrace the favouritism tag.

Some highly respected figures had to swallow those words whole as the national side reverts to its historical underdog status. This suits the Irish demeanour, seemingly, and always has, perhaps always will.

See how Ulster, led by the herculean Iain Henderson, and despite Rory Best’s injury number finally coming up, played at a level nobody has witnessed from them before.

“Teams always go up 10 per cent when they play the All Blacks,” said Steve Hansen recently or hear an ageing Serena Williams at Wimbledon last year: “It’s what makes me great. I always play everyone at their greatest, so I have to be greater. These young ladies bring a game that I’ve never seen before. It’s interesting because I don’t even scout as much because when I watch them play it’s totally different game than when they play me.”

Cullen couldn’t possibly scout for this Ulster performance. He knew Murphy and Timoney – two winning Blackrock College captains unable to establish themselves at Leinster – and the class act that is John Cooney would delve into deep, uncharted territory to create conditions for an upset.

“We have spoken a lot about the fact that, compared to last year where we were hunting people and hunting a trophy, now we’re being chased,” said Conan. “Everybody wants to beat us and be champions. We sat down earlier in the year and said it’s not good enough to do what we did last year to go and win again, to get a fifth star and do the double; we’re going to have to be miles better than we were.”

Ireland’s post-Six Nations narrative has focused on “keeping the faith” but on honest inspection they were brutally overpowered by England before capitulation in Cardiff.

Such defeats present all comers with a double blueprint to unburden notions of World Cup success in Japan. So what about Leinster? Largely the same cohort limped back into this fixture only to struggle when faced by the ferocity of an revived interprovincial rivalry.

The simple version of Ulster’s gameplan was to clamp Garry Ringrose before he could put Jordan Larmour or Adam Byrne into space. This offers a clear method to deny future progress with Ulster coach Dan McFarland providing a short tutorial explaining how line speed is born from the tackler’s ability to rapidly regain his feet.

“I was asked if we were playing with two opensides [Murphy and Marcell Coetzee] to go after their breakdown,” said the increasingly impressive McFarland. “No, that wasn’t our policy. When you look at Leinster and think about going after their breakdown you have to be really good to get hands on the ball regularly. Bath did it.

"Could we have done it if we really went after that? Yes, but we decided it was numbers on feet and quality of tackle, to have numbers to get off our line in the outside channels and shut them down. That’s down to the quality of coaching Jared Payne has given the guys. It’s also about the ability to read when to do that. Get that wrong and you are in all sorts of trouble.”

They got it right, only to run out of steam.