Saracens deliver in style despite absence of expectant father Farrell 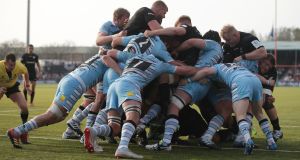 Mark McCall revealed Owen Farrell was hopeful of making Saracens’ 56-27 rout of Glasgow less than an hour before kick-off despite the imminent birth of his first child.

Munster await in the Heineken Champions Cup semi-finals after the Warriors were crushed at Allianz Park by a Saracens team missing their playmaker-in-chief, who was in hospital with his wife Georgie.

As the 3.15pm kick-off approached, Farrell called McCall to tell him he still had every intention of playing.

“We had a rough cut-off point. His wife went into labour last night. At half eight this morning he was pretty confident it would all happen, but it didn’t,” the Saracens boss said.

“He did phone me at two thirty and say ‘in the next half hour’ . . . I said ‘Owen, the game starts at three fifteen! I don’t actually know if he’s had the baby yet.

“But the important thing was that he was where he should have been – with his wife.”

The landslide win against Glasgow would have been Farrell’s first match since the end of England’s Six Nations campaign and McCall wants him in action before the European semi-final against Johann van Graan’s side at the Ricoh Arena in Coventry on Saturday, April 20th.

“He hasn’t played here for the last two weeks so he’ll be keen enough to get back out there,” McCall said.

“We have a big game coming up and he does need to play a little bit.”

Even without Farrell, Saracens amassed seven tries in the most conclusive of their three victories over Glasgow this season, although the win was marred by an ankle injury sustained by captain Brad Barritt.

“Alex Goode came in at flyhalf and did a magnificent job. David Strettle did a great job off the bench. Liam Williams was great at fullback,” McCall said.

“Alex hadn’t trained at flyhalf all week, although he has played there for the last four weeks. To play with the control he did was outstanding.

“To beat a team by 57 points in a European quarter-final says you’re not a bad team. If you take away the first and last minute, they don’t have many points at all.

“The big cloud is Brad getting injured with 30 seconds to go . . . it’s potentially devastating. It’s an ankle sprain.

“They can be okay, or not good, and we won’t know for a few days. He deserves more because he played so brilliantly.”