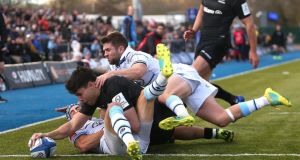 Ben Earl came off the bench to inspire a second-half turnaround as Saracens survived a scare from Cardiff Blues to record an emphatic 51-25 bonus-point victory in the Heineken Champions Cup.

The home side’s 20-game unbeaten run was under threat at half-time after Blaine Scully and Matthew Morgan had crossed to hand the visitors a surprise 18-13 lead at Allianz Park.

However, Sarries, who scored through Richard Wigglesworth and two Owen Farrell penalties before the break, produced an outstanding second-half display to blitz their opponents, running in six tries.

Replacement Earl and wing Sean Maitland crossed for two each while Christian Judge and Ben Spencer also scored, taking Mark McCall’s men back above Glasgow Warriors in Pool 3 after their win over Lyon.

Saracens headed into Sunday’s match as overwhelming favourites and it took them just four minutes to assert their authority on proceedings.

Alex Lozowski pierced the Cardiff defence after a pass from Brad Barritt and squared for scrum-half Wigglesworth to saunter over the line unchallenged.

Cardiff looked set for a gruelling afternoon as England fly-half Farrell provided the extras to make it 7-0, but the visitors regrouped and produced a superb 20-minute spell to turn the match on its head.

A neat attacking set allowed Scully to cross out wide for his first try of the season, and then Morgan put them ahead with a stunning individual effort after intercepting the ball deep in his 22.

Farrell cut the lead back to five points with a penalty after Michael Rhodes had seen a try disallowed for stepping into touch, but Gareth Anscombe restored the Blues’ advantage with a kick of his own after more clever wide play from John Mulvihill’s men.

Saracens ramped up the pressure as half-time approached and cut the gap to five again as Farrell converted another penalty, with Cardiff’s defence beginning to show cracks after a solid opening half-hour.

And the two-time winners were back in front within seven minutes of the restart as replacement Earl crossed twice in quick succession, heading over on the wing for the first and intercepting a long attempted Anscombe pass for the second.

Cardiff’s defence had held out admirably in the first half but as time progressed they became powerless to stop Sarries slicing through them, and the match was settled when Scotland international Maitland recorded two more tries in the space of a minute.

Spencer was next to score for the Premiership leaders after being picked out by Lozowski, and with 10 minutes left Farrell brought up 50 points as he converted from Judge’s try.

Olly Robinson provided a late consolation score for an injury-depleted Cardiff, but it was far too late to make any difference to the result.