Women’s rugby heading towards permanent professionalism elsewhere but not here 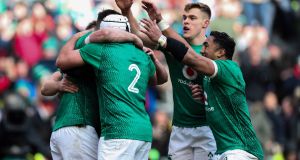 Leaders are made not born, so they say, but James Ryan looks to be bucking that trend as well as everything else. He always had the gift.

Garry Ringrose, on the other hand, needed to nurture it, almost grow into his own words, but pre-match yesterday there he was, mild mannered no more, in the huddle, with all eyes on him, barking out instructions.

The age of Rory Best and Johnny Sexton ends in 2020 so other leaders, be it formally or informally, will be required. They are already in place. Ryan and Ringrose are the modern men fully formed and able to drive Ireland into a new decade under England’s lost coach Andy Farrell.

They already lead by deed. Take them from this team and the personality of the group alters dramatically. Chris Farrell is bigger and perhaps even a better passer than Ringrose but there is no decision to be made about number 13. Antoine Dupont’s last gasp tackle denied him a wonderful try yesterday but that’s all this great exhibition of centre play was lacking.

And still, Ryan was man-of-the-match. He was brought to Rome as a passenger and while Ultan Dillane played his heart out there is no comparison to be made between them. One is a generational gift from the rugby factory that is St Michael’s College, the other a damn fine Kerry lock.

Ryan was first man onto the field at underage and despite being 22 there is precedent in the professional era for Ireland naming a young captain. But maybe the load will be lightened by Farrell giving the job to Ringrose. Again, asking a young outside centre to lead would not be uncommon.

What was abundantly clear at the Aviva Stadium yesterday is the irreplaceable nature Ryan and Ringrose bring to Ireland right now and deep into the future.

By the numbers: 205 - French tackles – as sure a sign as any that Ireland are back on form.

No quick fix’ for Ireland

The record attendance of 6,047 could see it and now they can be it.

The 7pm kick-off at Donnybrook on Saturday night proved how important it is for the IRFU to keep the women’s team in a prime time slot on the eve of male Test matches. The atrocious performance must also be highlighted because to find the bright spots – and there were some – against a progressive French side would be condescending reportage (and there is enough of that). They took a 47-17 beating that long term observers of women’s rugby on this island could see this coming. The Sevens game and qualification for Tokyo 2020 is the union’s stated priority. These players are less likely to be seen due to the nomadic nature of the Sevens circuit, which is a pity because progress is real, so for now the younger people in this 6,000 support base will need to learn what being a true supporter is all about.

“Very hard to watch at times last night but we have to move on to Wales,” said former Ireland coach Philip Doyle. “It starts with Ciara Griffin, Claire Molloy, and Anna Caplice game plan around them and the rest will follow! There is no quick fix. There is a lack of creativity across the board.”

Griffin sounded like one of the great amateur Ireland leaders of old: “We wanted the girls to put their bodies on the line. There was great passion, great heart.”

Women’s rugby is heading towards permanent professionalism in France, England and New Zealand. Not here.

Quote of the week: “Joe got very emotional and told me he wasn’t allowing me to keep going after he left” – Rory Best (36) bids adieu to the Aviva.

Slattery ‘is the fighting spirit’

Who is the greatest Ireland openside of them all? It’s a good debate between Fergus Slattery and Seán O’Brien with the solution to perhaps split them by amateur and professional lines.

Slattery turned 70 recently but the greatest French tearaway of them all, Jean-Pierre Rives (no debate needed), was unable to attend his old enemy and lifelong friend’s soiree over the weekend, so he sent a message: “Fergus was not playing with the fighting spirit, he is the fighting spirit. Fergus was not playing for Ireland, he is Ireland. Avec toute mon, admiration, always. Jean.”

We can only wonder what Rives thinks about the collapse of French rugby in modern times.

He missed Slattery’s birthday party because he was watching his teenage son play a golf tournament. Maybe that’s the solution for France. Focus on other sports.

Their inability to escape the 22 in the first half could be a metaphor for their current state: there was no mongrel aggression, no plan.

1 Pete Sampras: The forgotten great with the best serve in the business
2 The Game Changers: Vincent O’Brien, a pioneer who took Irish racing to the world
3 The unsolved mystery of Goran Ivanisevic’s stunning Wimbledon win
4 Cam Newton broke the mould: Can his flame be rekindled at the Patriots?
5 John O’Sullivan: IRFU must recognise vital role of clubs in rugby's return
Real news has value SUBSCRIBE