Matt Williams: There is still hope for French rugby to return to glory

The French team is on an upward curve, but the rich seam of local talent must be mined 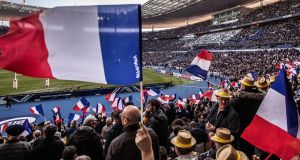 French supporters at the Six Nations Championship Round 3 match between France and Scotland at Stade de France, Paris, in February. Photograph: James Crombie/Inpho

I have little doubt that over the next two years this French team’s performance curve will move steadily upwards. That’s because there is excellent rugby talent in France and in this team.

After the victory over Scotland, the lead headline in the French rugby bible, Midi Olympique, claimed in exhaustion: “Un brouillon d’espoir.” The first draft of hope.

After years of selection mayhem, this week’s French selection is unchanged. Finally some stability.

It appears the Toulouse spine of the backline – Antoine Dupont at scrumhalf, Romain Ntamack at outhalf and Thomas Ramos at fullback – have been rewarded, not just for winning, but for playing in a style that is deeply ingrained into the French psyche – one that is best described by Midi Olympique as playing with the “Toulousain DNA”.

As a club Toulouse have returned to a philosophy of working exceptionally hard at developing their own academy players, and embraced their traditional game of offloading, support running and counter-attack. The idea that the Toulouse way is being followed by this French team is supported by an astonishing attacking statistic.

In international matches played by the top 10 ranked teams in world rugby from June 2018 to the present, France are number one in creating line breaks from both turnover ball (12) and counter-attacking from kicks (eight). Even more than New Zealand.

That’s even more surprising when you compare those numbers to Ireland, who are only just ahead of Fiji in ninth position. Ireland have mustered a measly two line breaks from counter-attacking kicks and three from opposition turnovers.

Toulouse have rejected the short-term route of the vast majority of other French clubs, in that they have reduced the number of foreign players in their squad.

It is the opposite approach to that of clubs like Montpellier, who opened the floodgates to the extent that their team sheet resembles a high veldt retirement village for ageing South African players in the south of France. These foreign players are blocking the pathways for the ocean of talent that is still being produced in France.

The geographic arc from the Basque country on the Atlantic coast, stretching along the Pyrenees, through Toulouse to the Mediterranean coast of Perpignan and onwards towards Toulon remains a goldmine of rugby talent.

Over the last six months I have run training sessions and attended games with players ranging in age from 16 to 23 with the Centre de Formation (Academy) in Narbonne. In that time I have observed more natural talent in the south of France than I did in five years in Australia.

The winning of last year’s Under-20 World Cup by France is proof of this. But there is a blockage in the talent pathway from junior to senior teams. While the traditional breeding grounds remain strong, the local teams who once dominated the French club scene have greatly diminished.

Those once-great clubs, who are still developing quality players, now languish in Pro D2 or Fédérale 1 (third division). Former giants like Biarritz, Dax, Narbonne, Béziers, Colomiers and Bayonne do not have the vast populations to support teams in the Top 14.

These clubs still develop many players, but they cannot afford the costs to support them towards becoming world-class athletes. The blockage is exaggerated because many of the Top 14 clubs pay lip service to their academies. I recently attended an Espoir (under-23) match between Narbonne and Toulon, a Top 14 club that historically contracts lots of foreign players. Narbonne scored more than 50 points.

As the detectives say: “Follow the money.” If you do you’ll find many nouveaux clubs have wealthy patrons injecting millions in wages for short-term results. Short-term means the coach is told to buy players (that someone else has spent money and time developing) and win or the owner will find someone who will.

Today’s Irish team are out of form, but the Irish system is in a state of excellent health

Clubs from Top 14, Pro D2 and Fédérale are now contracting hordes of journeymen from overseas, rather than developing local French talent.

This is not only financial madness, it has created a situation where many talented French players cannot get that vital first contract which teaches the young players so much about growing into a quality professional.

Irish rugby is in rude health because at the very start of professionalism the IRFU rejected opening its doors to the waves of foreign players that were available. Instead, they quite rightly forced the provinces to take a long-term view and develop their own players. That is a major reason why the Irish team and the four provinces are so strong today.

It is undeniable that today’s Irish team are out of form, but the Irish system is in a state of excellent health.

French rugby has the best structures in the world. Three divisions of professional teams. Academies in the top two divisions’ clubs and many below that level. Rugby remains the game of the people of the south.

This is why the Toulouse experiment is so vital to the long-term success of French rugby.

It is possible that other clubs may see the success of Toulouse and agree to a long-term plan that limits the number of foreign players to four per club and one per club below Pro D2.

If French rugby can ever become unified and focus all its resources for the good of the national team, like rugby does in both Ireland and New Zealand, the potential for success for the Tricolors is truly unimaginable.