The Offload: There is no place to hide for an out-of-form nine 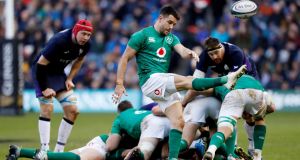 No hurry for Murray

The Conor Murray problem is exacerbated by the fact it is Conor Murray. When a scrumhalf suffers a dip in form – like Aaron Smith, Murray’s chief rival to the undisputed crown, after his toilet escapades a few years ago – there is no place to hide. That’s what makes these number nines reaching and retaining such dizzying heights of consistency so impressive.

When Joe Schmidt was asked directly about Murray’s performance at Murrayfield he ignored the question, instead complimenting five other Ireland players, but there are some clues the coach is dissatisfied with his Garryowen general.

“We’ve got to get better at that,” said Schmidt about stark issues with an aerial game Ireland rely so heavily upon, ergo the accuracy of Murray’s right boot. “I think our kicking game is a strength for us, as a rule, and we’ll be looking to remedy a few of those things and get a bit more continuity.

“I think Conor started taking a bit more responsibility when Johnny [Sexton] was feeling a little bit sluggish . . . Conor was trying to kick from positions he wouldn’t normally kick from and when you’re trying too hard to do something, it sometimes goes awry.”

Like the best laid plans of mice and men? Never mind. Murray is only following orders. Successful sporting teams are never a democratic environment.

He won’t be dropped because (A) Ireland don’t panic any more and (B) he needs game time after a six month injury lay off (neck we were reliably informed).

There are mitigating circumstances. Murray was damaged during the 25 phases of heavy defence before half-time. He limped off on 77 minutes. He did score a clever try. And he remains Conor Murray. Eventually, he’ll remember that as well.

By The Numbers - 3: Jonny May’s first half hat-trick against France. He’s on fire. So are England.

Imagine if the stars aligned back in 2005 and Johnson returned to the international arena for Clive Woodward’s ill-fated, ill-advised, disastrously over planned Lions tour of New Zealand. Johnson’s last Test was the 2003 World Cup final – when he lifted the William Webb Ellis trophy – just as O’Connell was threatening to become the once in a generation lock and leader the Leicester man had been to that point.

“Ireland were happy to grind it out,” said O’Connell in Murrayfield as Johnson nodded in agreement, “They were happy to not play off those mauls.

“There wasn’t a lot of complication to how they played they kept it very simple. Just ground it out. Jonno here was loving it.”

“As forwards,” Johnson said, “You are sitting there saying ‘that was good, enjoyed that.’”

Imagine the pair of them, ruining game after game as the Lions trudged their way around New Zealand, the king showing the prince how to lead. If there is any sense in the world, O’Connell will continue his all too brief tutelage of James Ryan while Johnson seeks out Maro Itoje to impart some quiet guidance. Either way, good, no nonsense TV.

Quote of the week: “Johnny failed a HIA. He got a stamp on the head. He got a little bit of treatment out there.” – Joe Schmidt on Johnny Sexton’s concussion.

Information is routinely shared among rugby coaches, it’s common practice, but the sight of Japan coaches Tony Brown and Jamie Joseph rubbing shoulders with England and Eddie Jones in Pennyhill Park this week should set alarm bells ringing. Japan need to mug Ireland or Scotland so their entire World Cup hosting exercise is not deemed a flop.

“We have just had the Japanese coaches with us for the week – Jamie Joseph and Tony Brown – and they are aiming to have a ball-in-play time of close to 50 minutes,” said Eddie. “France average 30 minutes.”

Brown (inset) is a particularly interesting figure – sought by Leinster after Joe Schmidt moved on and considered a younger version of the attacking genius we see Jacob Stockdale continually profiting from in the Irish attack.

The IRFU are hardly missing a trick with Johann van Graan shadowing Schmidt’s Ireland this past week ahead of Munster’s visit tor Murrayfield for the Champions Cup quarter-final. This provided valuable insight for van Graan, on a number of levels, but his presence was topped off by the embrace he gave Joey Carbery after the young outhalf guided Ireland to victory in a manner Munster need him to repeat.