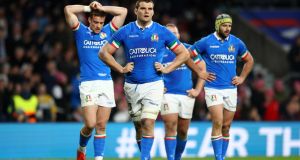 Eddie Jones has called for Six Nations organisers to consider introducing relegation after Italy fell to a 21st successive Championship defeat on Saturday.

The Azzurri were swept aside 57-14 in an eight-try rout at Twickenham to renew scrutiny of their place among Europe’s elite, as pressure grows for a play-off from the second tier to be established.

Georgia, who trained with England in the second fallow week, are arguing a strong case for Six Nations inclusion and are the current holders of the Rugby Europe International Championship crown.

“The organisers talk about the Six Nations being the best rugby competition in the world and it probably is close to it, but to improve it you’ve got to find a way of making sure you’ve got the six best teams in Europe always playing in it.

“If that involves relegation then it’s something that should be looked at very closely.”

Georgia spent two days at England’s camp in Oxford, with fights breaking out during the live scrummaging sessions.

Jones believes the combination of facing the rugged Eastern Europeans and a series of social events helped the squad bounce back after their defeat to Wales in Cardiff.

“We had a couple of hard training runs against Georgia, a few nights on the beer. Just relaxing, enjoying each other’s company,” Jones said.

“And a bit of fun organised by the players in between the hard training. It’s just finding that right balance.

“We went punting in Oxford last week. We did a tour of some of the university buildings — I don’t know how much the players enjoyed that part! It was a good education for them and a bit of fun.

“I went to a coffee shop, I couldn’t imagine putting on a straw hat!”

1 Klopp to rest Lallana to ensure he remains fit for transfer
2 Pete Sampras: The forgotten great with the best serve in the business
3 Sarah Rowe unfazed by uncertainty women’s AFL return
4 Game Changers: Vincent O’Brien, a pioneer who took Irish racing to the world
5 Chelsea jump up to third but not without a scare at Palace
Real news has value SUBSCRIBE