French media were negative in their assessments of national side

Patrick Madden at the Aviva Stadium 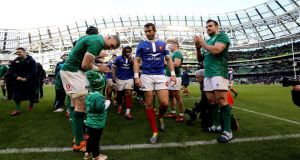 And breathe. Ireland are back – not that they ever really went away – thanks to Sunday’s 26-14 win over France at the Aviva Stadium.

The defending champions have had a hard time of it in the 2019 Six Nations. Having finished last year on such a high, it only took one defeat to England and two unconvincing performances against Scotland and Italy for the nation to begin to doubt.

Therefore the visit of a supposedly resurgent French side to Dublin was key. Another scrappy win and alarm bells would be ringing again – a defeat and the world would be ending.

An emphatic victory however would steady the ship and spread confidence ahead of next weekend’s showdown with a Grand Slam-chasing Wales in Cardiff.

And that was what Ireland delivered. Joe Schmidt’s side made a thunderous start, with captain Rory Best scoring after just two minutes. Two further scores followed in the second-half, with Ireland’s dominance in territory standing at 89 per cent moments before the break.

Ireland’s power game was back to somewhere approaching its best against Les Bleus, with James Ryan, CJ Stander, Iain Henderson, Tadhg Furlong and Cian Healy all having a huge impact.

There was also a fine performance in midfield by the returning Garry Ringrose, who shone consistently on both sides of the ball.

But does Ireland’s win mean they are now back to their best? Or does their profligacy, coupled with French incompetence, mean there’s still plenty of work to be done?

In the Guardian, Paul Rees suggests it is more a case of the latter, he writes: “France were not as abject here as they had been at Twickenham a month before, but Ireland’s weaponry was blunter than England’s. . .

“. . . if Ireland were dominant here until they emptied their bench to rest players for Cardiff, they will need more polish if they are to deny Wales the Grand Slam and give England a tilt for glory.

“The game was effectively won for Ireland in the first half. France conceded in the second minute of their clash with England – they lasted until the third in Dublin, after Damian Penaud conceded a lineout deep inside his own 22 and the Irish pack did the rest.”

And in L’Equipe they write that talk of a revitalised French side stunning a shaky Ireland outfit was quickly shown to be “false illusions,” with the hosts on top from the outset.

Meanwhile on Midi-Olympique’s website, Rugbyrama, Romain Asselin writes that France were given a rugby lesson by Ireland, and argues the 26-14 scoreline flattered Jacques Brunel’s side.

He also suggests that defeat in Dublin has left France’s Rugby World Cup plans in further disarray, with just a trip to Rome to come before Brunel names his squad for Japan on June 18th.

Elsewhere in the Telegraph (UK), Ben Coles suggests Sunday’s game saw Ireland regain their mojo, he writes: “Schmidt’s men finally showed the kind of form that elevated them above all comers in 2018, a year that comprised a Grand Slam and second victory over New Zealand.

“Skipper Best marked his final Six Nations match in Dublin before his intended retirement at the end of the calendar year in style, with a try and another top performance.”

And his views are echoed by Rory Keane of the Daily Mail Online (UK), who writes: “That’s more like it. This was a return to the capital punishment that Ireland inflicted on the All Blacks last November.

“Rugby is a simple game when the basics are mastered, and Ireland were ruthlessly efficient in their work on Suday. They bossed the breakdown and dominated the collisions, and everything fell into place after that.”

While Ireland’s win keeps their Championship title hopes alive they remain very slim, and victory over Wales next weekend is unlikely to be enough unless England suffer an improbable defeat at home to Scotland.

However, while an Ireland win would likely hand England the title it would be a major statement of intent ahead of the Rugby World Cup, and provide a fitting Six Nations farewell for the outgoing Joe Schmidt.

Grand Slam-chasing Wales will have watched Sunday’s France game with interest, and Ireland’s revival will concern them ahead of the final round.

But in Wales Online, Andy Howell has suggested the French gave their hosts an easy ride at the Aviva Stadium, and has identified a number of areas for Warren Gatland’s side to target next Saturday.

He asks: “What will Wales coach Warren Gatland have learned – other than that Ireland hardly had to break sweat to beat one of the worst French teams in history in a flat and largely dour encounter?

“At times Ireland’s clash with France resembled a practice match with Les Bleus offering virtually nothing except from some determined tackling until the final few minutes with the result long having being settled.”

Howell also questions the form of Conor Murray: “He was arguably the world’s best scrum-half following the Lions tour of New Zealand in 2017 but a serious neck injury seems to have knocked his confidence. Murray was sidelined for months and doesn’t appear to have the appetite for the physical side of the game he used to relish.”

On to the Millennium Stadium and Super Saturday.

Ireland might not win the title, but they can certainly silence the doubters.

1 Betting shops face uncertain future as they prepare for Monday reopening
2 Tianna Bartoletta: ‘After you’ve gotten your medal, you become black in America again’
3 Timo Werner giving up on Liverpool dream on path to being truly wanted
4 Kameko shocks Pinatubo in 2,000 Guineas at Newmarket
5 Sideline Cut: Marcus Rashford proves himself a leading man off the pitch also
Real news has value SUBSCRIBE